Check out all inside pics of Harshvardhan Kapoor and Jacqueline Fernandez's photoshoot.

Just look at the gown flow! Jacqueline Fernandez and Harshvardhan Kapoor teamed up for a photoshoot for Harper's Bazaar Bride and little did we know that it was going to be so gorgeous. While to be honest, the cover was hot af but the inside pics have overtaken them! Jacky and Harshvardhan's chemistry is surprisingly sizzling and is very much visible in the inside pics. You'll notice in most of the pics that both of them have kept their eyes shut but still managed to strike up such a crackling chemistry. By just seeing the images, you'll feel that they share a burning passion. Clearly, they've cracked the code to bringing out sexed up chemistry on camera. Anyway, out of all the pics, the one which we can't stop swooning over is this black feathery gown by Ashi Studio that Jacky is wearing. It's gorgeous to another level. Also Read - [Video Alert] Meet Kangana Ranaut - The seemingly ordinary bride with an unassumingly extraordinary attitude

However, somehow the whole feel of this shoot seems to give us dark vibes. It reminds us a lot of the famous Natalie Portman movie, Black Swan. Well, for several reasons. One is the sinister balance between the black and white hue. In the cover while Jacqueline is this gorgeous bride in white with her handsome groom, inside she's this draped in a black feathery gown that literally takes over most of the screen. Notice how both the gowns are interestingly similar in terms of the applique work. There's definitely some kind of symbolism used by the stylists to have thought of such a gorgeously eerie photoshoot. Anyway, you can check out the pics below. (ALSO READ - Harshvardhan Kapoor and Jacqueline Fernandez are 'cosying up' on this cover looking smokin' HOT - view pic) Also Read - Kangana Ranaut's kitschy bride look for a mag cover falls flat - view pic 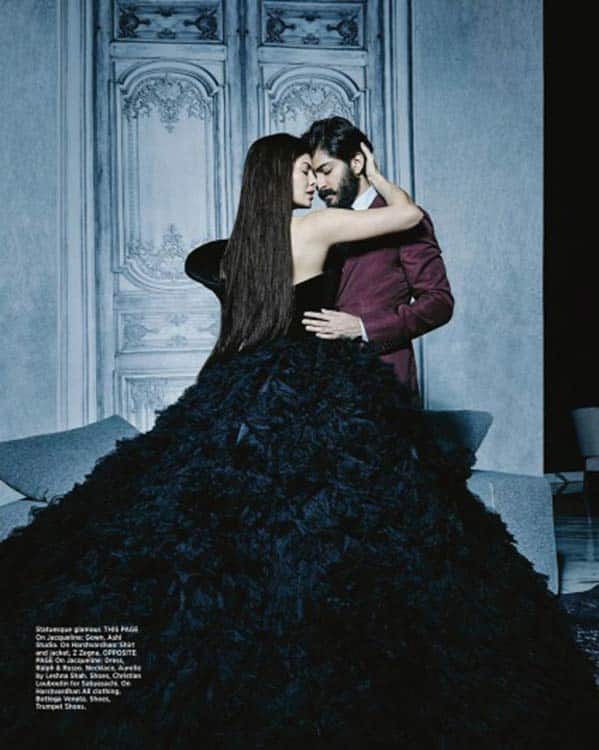 Like we said earlier, this pic somehow makes us feel like there's a dark, twisted romance going on between the two. Totally lovin' the look and feel of this certain pic! 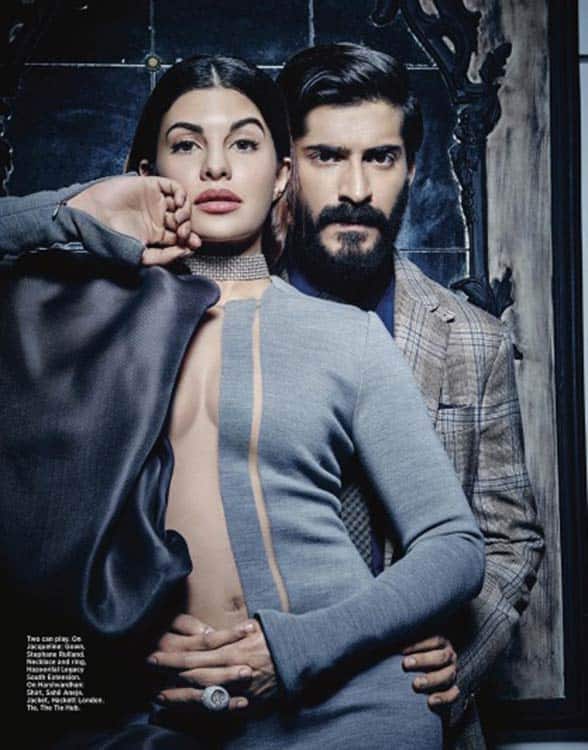 In case you didn't know, the grey ensemble donned by Jacky is actually a gown. I really like the sheer panels made in the centre because it beautifully complements the diamond choker she has teamed with the outfit. Even Harsh's dapper look as he stands behind his photoshoot bride is really good. 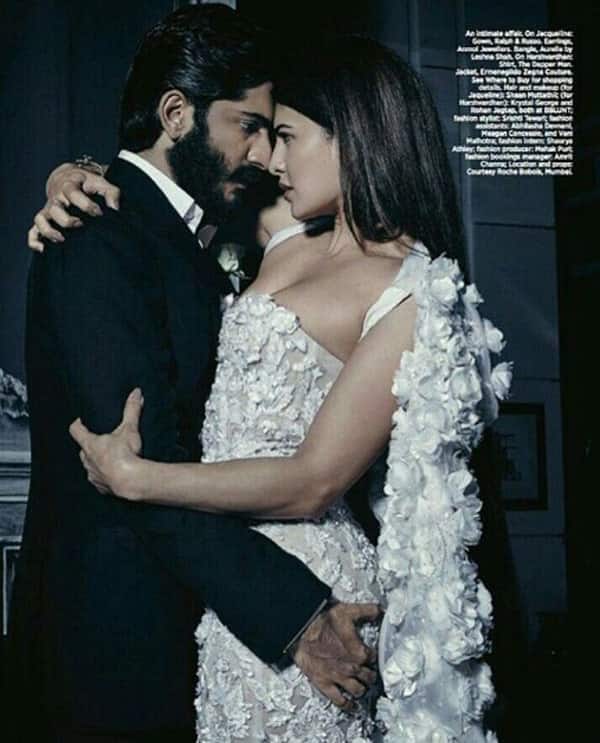 The ivory gown with applique petals is just lovely. That's definitely the kind of gown I'd want for my wedding. It reflects panache at it's best. Even Harsvardhan's suit for that matter. The navy blue colour is both rich and classy. I'm not really a big fan of the outfit or the feel of this particular pic. It has this forced romance between the two and all the passion seems to have been used up in the previous pics as there's nothing left here. Plus, I also don't like Jacqueline's outfit.

This is the first time Jacqueline and Harshvardhan have teamed up for a shoot and it has turned out quite sizzling. Perhaps seeing them in a movie wouldn't be such a bad idea after all. Don't they look quite hot together? What are your thoughts on this, BollywoodLifers? We're certainly approving of this pair and would like to see more of them!

Tell us in the comments section below and also stay tuned to this space for hot updates on celebrity fashion!