Janhvi Kapoor and Ishaan Khatter are having a social media banter and it's hilarious!

Janhvi Kapoor and Ishaan Khatter made their Bollywood debut together with Karan Johar's Dhadak and garnered a lot of appreciation for their performances. They have also been often linked with each other.

Janhvi Kapoor and Ishaan Khatter made their debut with Karan Johar's Dhadak and it has never been the same. The duo not only made quite the pair but also showed promise and potential to make it work in showbiz. But that wasn't the only headlines we read. For it was a tragic love story on the screen but the spell of their chemistry still lingers. So much so that rumour mills were/are abuzz that the two are reportedly dating each other. And while they have never accepted the link-up, Janhvi and Ishaan have never really categorically denied it. (Also Read: Janhvi Kapoor wants to set up Ishaan Khatter with THIS Bollywood actress!) Also Read - Watch: Janhvi Kapoor aces the Temperature challenge with her Aksa gang; Arjun Kapoor's comment takes the cake

Be it their reel romance or their real camaraderie, the duo is a refreshing change to the world of pairs in Bollywood. Even on Karan Johar's chat show, Koffee With Karan, Janhvi and Ishaan both made certain cryptic claims and honestly, we do get why they would keep the 'buzzing' under wraps. However, there are things that don't say hidden, like say, social media PDA. Or a banter in this case! If you haven't seen it yet Janhvi and Ishaan are fighting over a 'carrot' and it's too funny to put it in words. It all began when Janhvi posted a picture... Also Read - Janhvi Kapoor or Shanaya Kapoor – who looks HOTTER in the bikini? – Vote now

And then Ishaan happened. The actor took to the comments section and suggested something, we want to say fishy albeit in a different context (you'll see). Needless to say, Janhvi is embarrassed (???) and gave it back to him in her own style. Check out their banter here. Also Read - Dostana 2 actress Janhvi Kapoor’s bold and iridescent swimsuit will set your hearts on fire – view pics 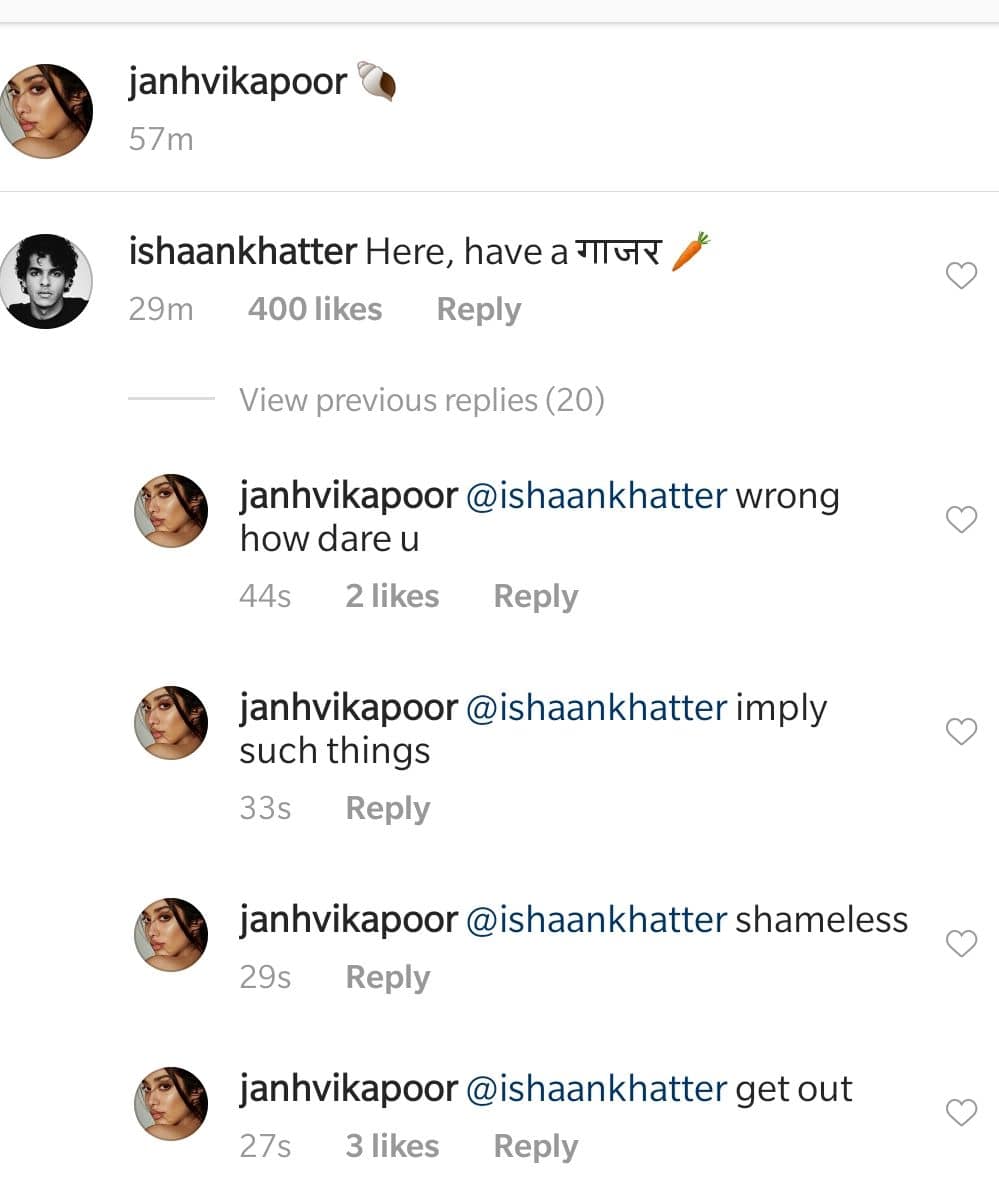 So, that's that! On the work front, Janhvi is all set to star alongside Ranveer Singh, Kareena Kapoor Khan, Alia Bhatt, Vicky Kaushal, Bhumi Pednekar and Anil Kapoor in Karan Johar's Takht. The period drama is slated for 2020 release. Janhvi also has Gunjan Saxena biopic titled Kargil girl. It is the story of a brave pilot who flew a fighter plane in the Kargil war zone in 1999 to save soldiers and earned a medal for her selfless act. To prep for her character, Janhvi has been working out in the gym and is also on a special diet to put on weight.

Meanwhile, Ishaan was rumoured to be approached for a Sanjay Leela Bhansali’s film. "Sanjay sir was quite impressed with Ishaan in Dhadak. He has offered the role in his next to the young actor. However, the formalities are yet to be worked out. The film is still in the initial stages and Ishaan is yet to sign on the dotted line," a source was quoted on a news portal. However, Ishaan is yet to formally announce his next films. Stay tuned to BL for more updates and scoops!