Janhvi Kapoor revealed that she had tested COVID positive with her sister Khushi Kapoor and had been in quarantine. The Dostana 2 actress shared a major health update on her and Khushi's recovery in her Instagram stories. Check it out below:

Janhvi Kapoor reveals she and her sister Khushi Kapoor had tested COVID positive. The Dhadak actress revealed she and Khushi had tested COVID positive on 3rd January. The two have recovered from the same. Janhvi revealed the health update after her recovery from the virus. "Hey guys! So me and my sister tested positive for COVID-19 on the 3rd of January. We have now completed the BMC required days of home isolation and have both tested negative. First two days were tough, and then every other day got better. The only way to protect ourselves from this virus is to mask up and vaccinate! Take care everyone!!" Check out her post here: Also Read - Ibrahim Ali Khan-Palak Tiwari, Navya Naveli Nanda-Siddhant Chaturvedi and three other star kids whose dating rumours are grabbing headlines 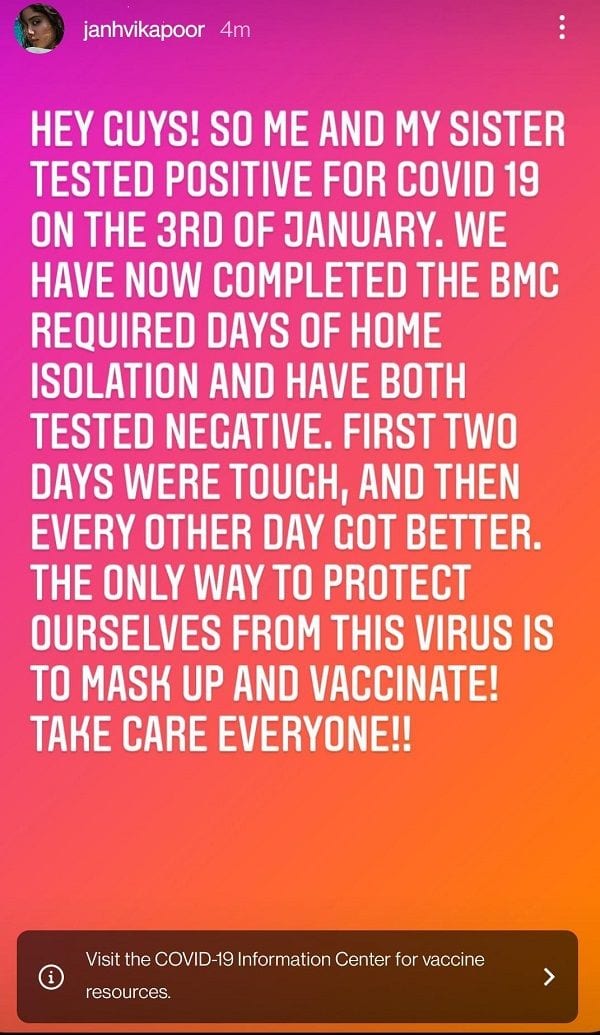 A couple of days ago, Janhvi had shared pictures on her gram with her sister Khushi Kapoor. The first picture included herself with a thermometer in her mouth. The following pictures followed pictures and videos of painting, playtime with their furry friend, book reading, resting and chilling with sister. "that time of year again," The Dostana 2 actress captioned the post. Check it out below: Also Read - Janhvi Kapoor breaks HOTNESS meter in a V-neck top and jeans outside her pilates class – view pics

On Janhvi's work front, she has Aanand L Rai's Good Luck Jerry. She also has Karan Johar's Takht in the pipeline which is currently stalled. Meanwhile, Dostana 2 is also on the backburner for a while. Reports state that Janhvi is working on a film with Sharan Sharma.