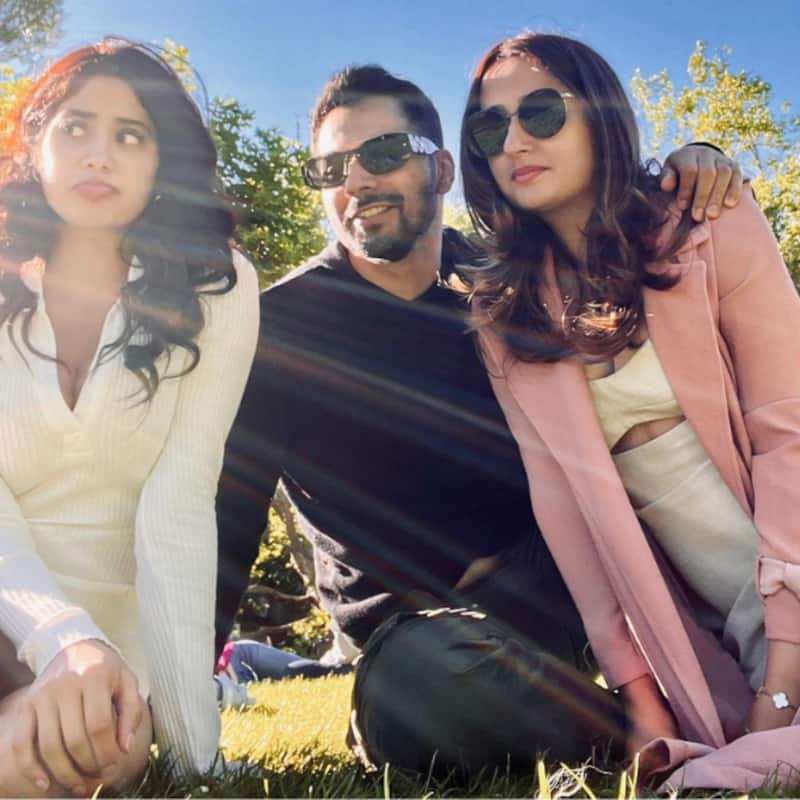 Janhvi Kapoor and Varun Dhawan are together going to feature in a movie called Bawaal. The two youngsters are shooting for the same in the foreign lands. Sridevi and Boney Kapoor's daughter Janhvi Kapoor shared a photo dump in which she was seen third wheeling between the married duo Varun Dhawan and Natasha Dalal. Yep, you read that right. Also Read - Alia Bhatt, Deepika Padukone, Kiara Advani and more hotties who slay in oversized blazer

Janhvi third-wheels between Varun and Natasha

Janhvi Kapoor is one adorable goofball. She shared some scenic pictures from Poland, where she and Varun Dhawan are shooting for Bawaal. Janhvi shared some sunkissed pictures of herself along with pictures of Ashwiny Iyer Tiwary and Nitesh Tiwari, Varun and Natasha. Janhvi is seen photo-bombing Ashwiny and Nitesh's loved-up picture while she has a goofy expression on her face while third wheeling between Natasha and Varun. Check out the pictures post, shared by Janhvi Kapoor on her Instagram handle here: Also Read - Trending Entertainment News Today: BJP minister calls Arjun Kapoor a 'flop' actor; reason why Ranveer was replaced by Ranbir in Bombay Velvet and more

Just a couple of hours ago, Janhvi Kapoor had shared a picture with Varun Dhawan in which she was seen twinning with the JugJugg Jeeyo actor in white outfits. Varun and Janhvi both wore crocheted tees. They seemed a little tired after wrapping a schedule in Amsterdam but looked eager for the next schedule in Poland. "Having a #Bawaal time in Amsterdam. Amsterdam sched wrap, Poland are you ready for us? #niteshtiwari #sajidnadiadwala," Janhvi captioned the post. Check out the post here:

Varun Dhawan’s FIRST look from Bawaal in a blue shirt and denim. Varun sports a beard and had red shades on. He dished out powerful aura. Varun rode a Royal Enfield. Janhvi’s look from Bawaal isyet to be out. Fans had loved Varun’s look, however. Bawaal releases on 7 April 2023. Also Read - Is Khushi Kapoor dating Janhvi Kapoor's rumoured ex-boyfriend Akshat Rajan? Their 'I Love You' exchange sparks speculations