Adding more fuel to the rumours, Jawan director Atlee shared a picture with Shah Rukh Khan and Thalapathy Vijay from his birthday celebration. 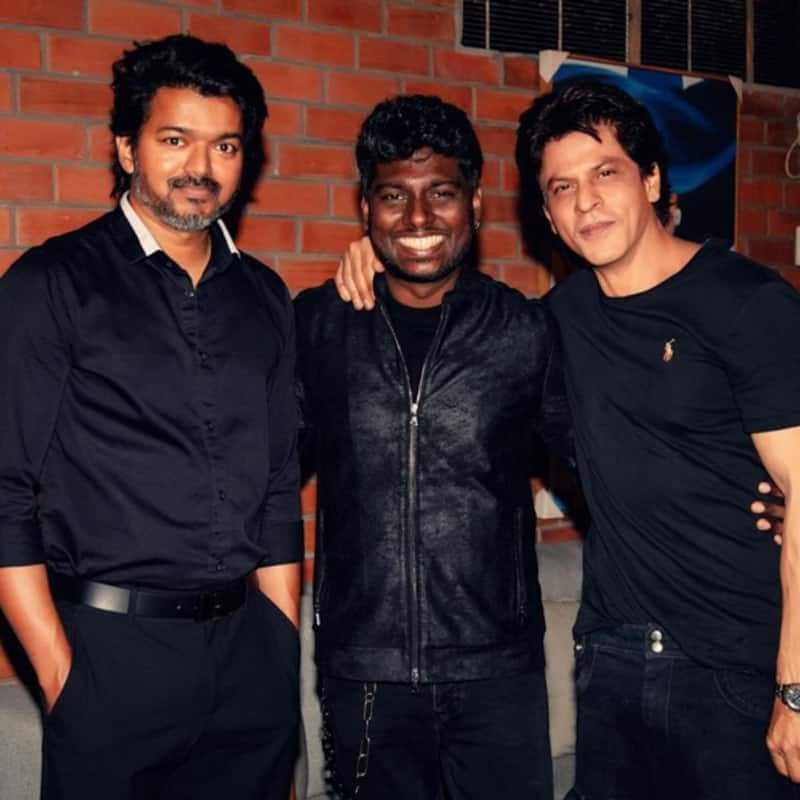 Shah Rukh Khan is all set to make a stunning comeback into films with director Atlee's upcoming film Jawan. While the first teaser has already already generated a lot of curiosity among the fans, there have been several reports stating that Thalapathy Vijay is going to do a cameo appearance in the film. Adding more fuel to the rumours, Atlee shared a picture with Shah Rukh Khan and Vijay from his birthday celebration. Also Read - Shah Rukh Khan, Akshay Kumar, Kareena Kapoor Khan and more Bollywood celebs who believe in crazy superstitions

The trio were seen wearing co-ordinated black outfits with a wide smiles on their faces. Sharing the picture, Atlee called SRK and Vijay his two pillars. "What more can I ask on my bday , the best bday ever wit my pillars. My dear @iamsrk sir & ennoda annae ennoda thalapathy @actorvijay," he wrote. The picture has blown up the internet like never before. Also Read - Dussehra 2022: Before Adipurush releases, check out how Shah Rukh Khan, Salman Khan, Akshay Kumar and more celebrated Raavan Dahan in THESE movies

What more can I ask on my bday , the best bday ever wit my pillars. My dear @iamsrk sir & ennoda annae ennoda thalapathy @actorvijay ❤️❤️❤️ pic.twitter.com/sUdmMrk0hw

Earlier reports suggest that Vijay Sethupathi has been roped in to play the antagonist opposite Shah Rukh Khan in Jawan. It is being said that Vijay has agreed to play the role of villain. There were also reports that Vijay has charged a whopping Rs 20 crore after the massive success of his recently released film Vikram, also starring Kamal Haasan and Fahadh Faasil. Also Read - Madhur Bhandarkar opens up on doing a film with Shah Rukh Khan; says, 'I'll definitely revisit it in...' [Exclusive]

Director Atlee is known for directing a string of successful blockbuster films in the south like Raja Rani, Theri, Mersal and Bigil to name a few. The Lady Superstar Nayanathara has already joined Shah Rukh for the film's shoot. The film will also have Sanya Malhotra, Sunil Grover, Priyamani and Rana Daggubati.

On the other hand, Shah Rukh also has Rajkumar Hirani's Dunki and YRF's Pathaan in the pipeline apart from Jawan. The King Khan was recently seen in a cameo in the Ayan Mukerji directorial Brahmastra, which stars Ranbir Kapoor, Alia Bhatt, Mouni Roy, Amitabh Bachchan and Nagarjuna. SRK was praised for his cameo of Mohan Bhargav who weilds Vanarastra in the sci-fi film.