Jayeshbhai Jordaar: Ranveer Singh's leaked pictures and video from the sets raises our excitement for the film

The live-wire of Bollywood and superstar Ranveer Singh is currently shooting in Idar, Gujarat for his upcoming venture Jayeshbhai Jordaar and while the first poster of the film has received a thunderous response on social media, the leaked pictures and videos from the sets have surfaced online and it just raised our expectation to another level. In the leaked images, we see Ranveer in his typical Gujju avatar, who is roaming around the streets on Idar. The '83 star is seen in a simple avatar with a striped pullover and straight pants. Also Read - Boman Irani's mother Jerbanoo passes away at 94; actor pens a heartfelt note 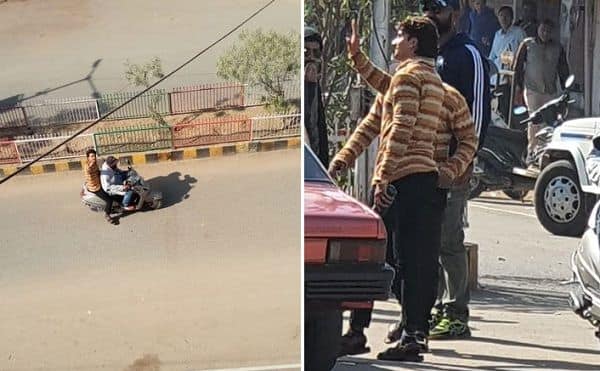 Jayeshbhai Jordaar marks the Bollywood debut of Arjun Reddy actress Shalini Pandey, who impressed everyone with her rock-solid performance in that intense love story drama. Describing the film, Ranveer Singh earlier said, "Jayeshbhai... is a film with a big heart. In its concept as well as in its appeal, it encompasses the broadest spectrum of the cinema-loving audience - it's a film for everyone. It is, in fact, a miracle script' that YRF found for me out of nowhere. The sheer brilliance of the writing compelled me to immediately green-light this film. Both humorous and poignant, 'Jayeshbhai...' is right up there with the most solid on-paper material I've ever come across."

He said: "I have been immensely fortunate to have collaborated with some of the finest filmmakers of our country. It is humbling and gratifying that they believed in my craft and chose me to lead their cinematic vision. "All that I have achieved as an actor today is due to these titanic cinematic forces having put their faith in me. I'm glad that today I find myself in a position where I can recognise exceptional talent and wholeheartedly back the vision of a brilliant new writer-director like Divyang." Anyway, are you excited for Jayeshbhai Jordaar? Tweet to us @bollywood_life.