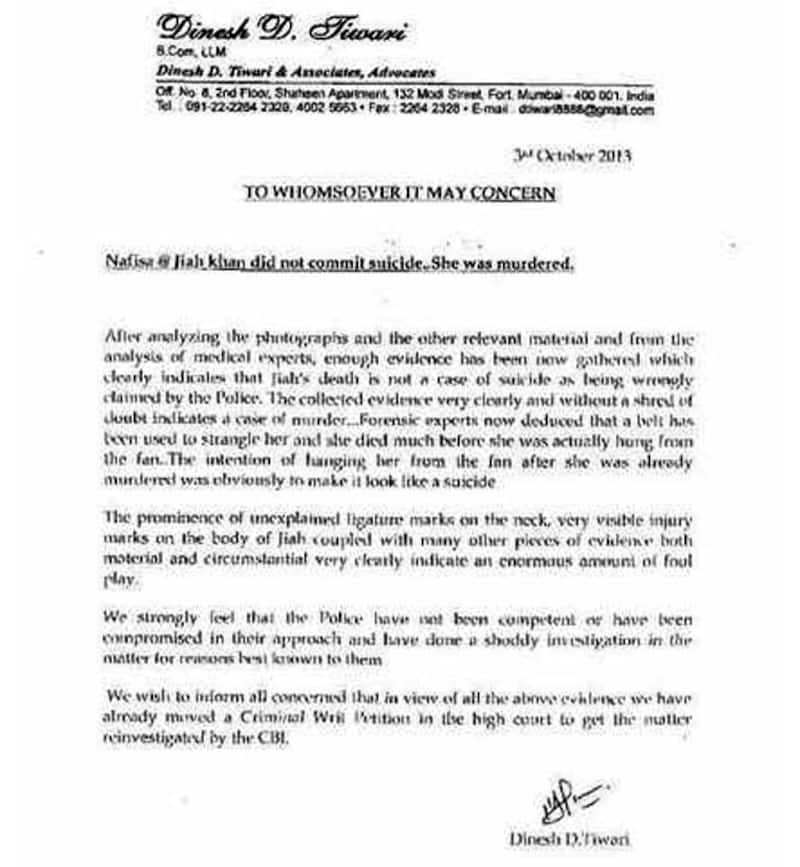 Last week Jiah Khan’s mother Rabiya Amin Khan moved the Bombay High Court petitioning for a Central Bureau of Investigation (CBI) probe into her daughter’s death, alleging that it had been murder. In a major twist to the late actor’s suicide case, it is now suspected that the 25-year-old was choked to death with a belt. Also Read - From Jiah Khan to Mandana Karimi: Actresses who accused Bigg Boss 16 contestant Sajid Khan of sexual misconduct in the past

After confirming this with forensic experts, Jiah’s legal advisor Dinesh Tiwari has issued an official letter stating, “After analysing the photos and other relevant material and from the medical experts, enough evidence has now been gathered, which clearly indicate that Jiah’s death is not a suicide as claimed by Mumbai Police. Forensic experts now deduced that a belt has been used to strangle her (Jiah) to death before she was actually hung from the ceiling fan to make it look like a suicide. The prominence of unexplained ligature marks on the neck, very visible injury marks on the body of Jiah coupled with many other pieces of evidence both material and circumstantial clearly indicate an enormous amount of foul play. We strongly feel that the Police have not been competent or have been compromised in their approach and have done a shoddy investigation in their matter for reasons best known to them.” Also Read - Salman Khan to Aditya Pancholi; Bollywood and TV actors who allegedly physically abused their girlfriends and wives

Rabiya and her lawyer Dinesh have already moved a Criminal Petition in the High Court to get the matter reinvestigated by the CBI. Hope justice prevails. Also Read - Shatrughan Sinha, Ranbir Kapoor, Kareena Kapoor Khan, Boney Kapoor and other celebs who cheated on their partners but were lucky to find love again