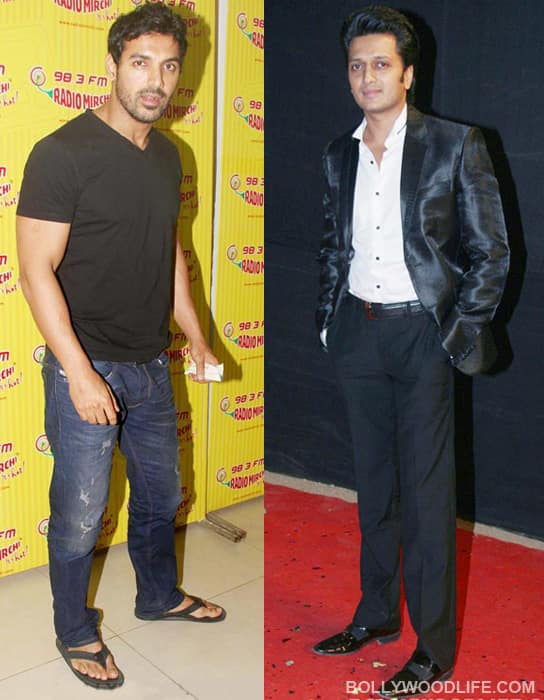 Two of our fave actors turn a year older today

John Abraham and Riteish Deshmukh have lots of things in common - they are both actors who have had a patchy career, they are appreciated by the audience more than they are by critics and their love lives have always made front page news. Don't forget, they were also born on the same date! While John turns 39 this year, the younger Riteish will ring in his 33rd birthday today. John started his filmi career as the sexy stud in Jism, continued with that image for a while, even did a villainish turn in Aetbaar and then moved on to comedy (Garam Masala, Dostana) and action (Force). His last release Desi Boyz was a comedy that brought him applause and box office success. However, what has kept him in the limelight for the past several years is his love life with Bipasha Basu more than his films. Their on-off-on and finally off relationship left his fans in a tizzy. It seems he has now found love with a non-filmi girl Priya Marwah. We wish them the very best. Also Read - Bipasha Basu will not be a part of Darr Sabko Lagta Hai season 2!

Unlike John, Riteish Deshmukh has found more enduring love with fellow actor Genelia D'Souza. Rumours of them being a couple started during his first film, Tujhe Meri Kasam in which both of them starred. Since that romantic comedy, Riteish has done several films but most of them have been comedies - Masti, Dhamaal, Double Dhamaal, F.A.L.T.U., Heyy Babyy and Housefull. He has explored other genres too with films like Rann and Darna Zaroori Hai, but comedies are his forte. He is shooting for Housefull 2 and Kya Super Kool Hai Hum, and also waiting for the release of his next film, Tere Naal Love Ho Gaya, which also stars Genelia. The two plan to wed in February 2012. We wish them too the very best. Also Read - When Ram Gopal Varma sent Amitabh Bachchan an SMS with the abuse Madarc**d – watch video!