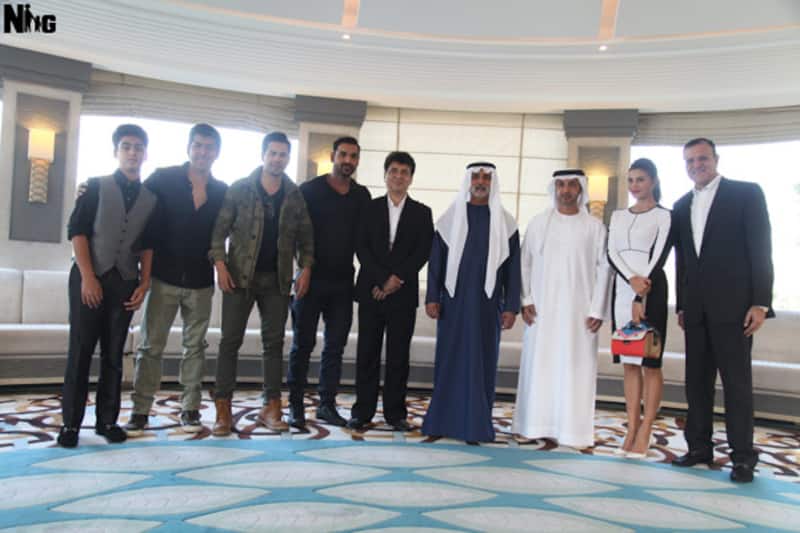 For all you John Abraham, Varun Dhawan and Jacqueline Fernandez fans, lo and behold as the trio recently got captured in one frame. The team of Dishoom, a Rohit Dhawan project, is in Abu Dhabi to shoot an extensive schedule of 40 days at local and iconic locations of the UAE. Also Read - Laal Singh Chaddha vs Raksha Bandhan box office collection: Aamir Khan and Akshay Kumar starrers must beat THESE 2022 releases to avoid being the worst flops

HH Sheikh Nahyan bin Mubarak Al Nahyan of Abu Dhabi welcomed Sajid Nadiadwala (Producer), Rohit Dhawan (Director), John Abraham, Varun Dhawan and Jacqueline Fernandez to his palace during their stay in the vicinity. The Abu Dhabi schedule will see the stars packing some punch as the title suggest an interesting action flick is coming in the forefront. The team also celebrated the King’s birthday at his royal palace while attending the grand luncheon. Also Read - Happy Birthday Jacqueline Fernandez: Salman Khan's Jumme Ki Raat to Badshah’s song Genda Phool, most popular songs that have given us some LIT dance moves

Varun, John and Jacqueline have been actively sharing the behind-the-scenes and on-set pictures on social media and by the looks of it, this film is going to be a total blockbuster! The photos are already creating a lot of excitement amongst the fans and even though the movie is still being shot, we can’t wait for it to hit the screens in July. The film, set to release on July 29, 2016, and is one of the most anticipated films this year. Also Read - Laal Singh Chaddha leaked online on Tamilrockers, Filmyzilla, Telegram and more; Aamir Khan, Kareena Kapoor Khan film latest victim of piracy