It all happened when Kangana Ranaut got into a verbal spat with a journalist at the song launch of Judgementall Hai Kya. According to reports, some senior journalists are scheduled to meet producer Ekta Kapoor of "JudgeMentall Hai Kya" on Tuesday, seeking Kangana's apology over the issue.

Ekta Kapoor's production house Balaji Telefims on Wednesday issued an apology after receiving widespread flak by the media fraternity over actress Kangana Ranaut's ugly spat with a journalist at a recent promotional press event here for the film "JudgeMentall Hai Kya", which is produced by the banner. "A lot is being reported about the debate that ensued between our film 'JudgeMentall Hai Kya' actor and a journalist, at the film's song launch event on July 7. Unfortunately, the event took an unpleasant turn. "While the people involved in it fairly held their own perspectives but because it happened at the event of our film, we, as the producers, would like to apologise and express regret for this untoward incident," read the Balaji statement.

Kangana Ranaut in another soup! Members of media demand public apology from actress after spat with journo

Things turned nasty at the launch of the song, The wakhra swag, when Kangana questioned a journalist over his negative remarks on her last release, "Manikarnika: The Queen Of Jhansi". Condemning Kangana's behaviour, members of the Entertainment Journalists' Guild of India (EJGI) on Tuesday collectively decided to boycott Kangana and demanded a public apology from the National Award-winning actress. Also Read - Namik Paul to enter Kasautii Zindagii Kay 2 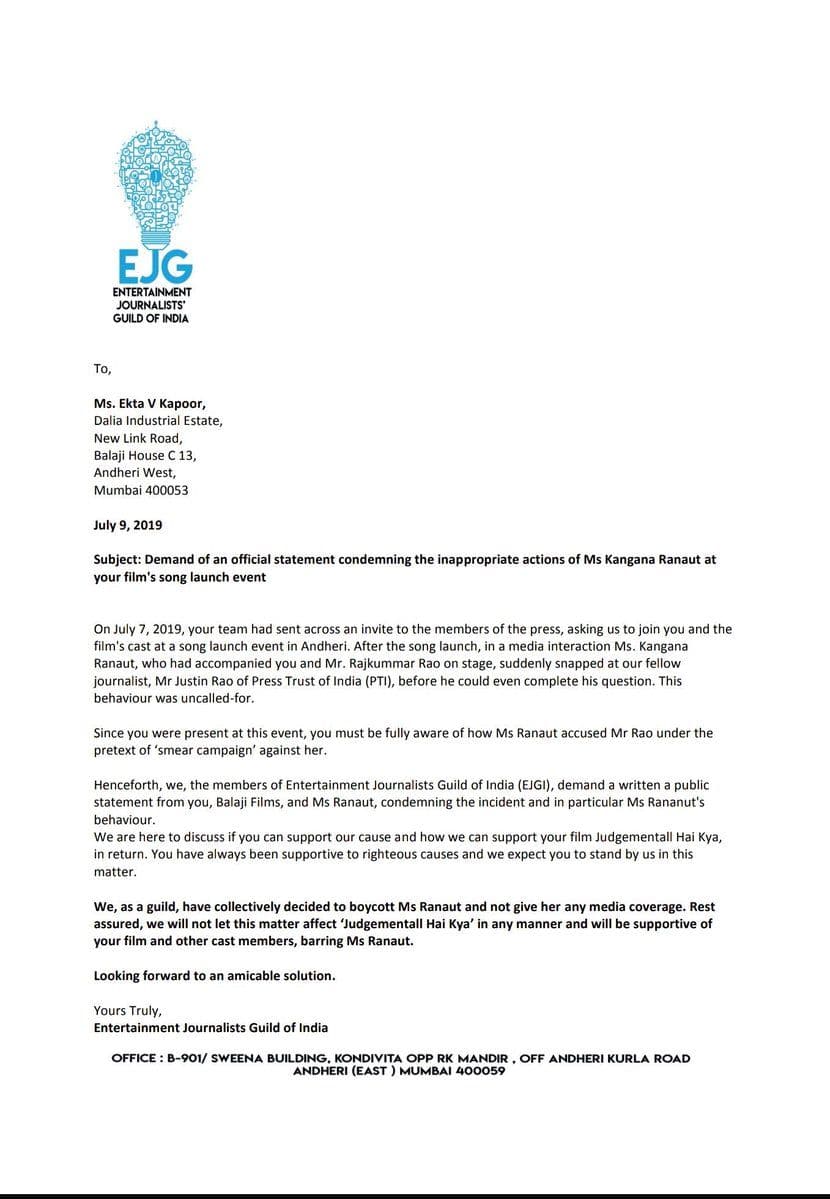 The Balaji statement, issued on behalf of Kapoor, urged the media "to not let this one incident hamper the team effort that has gone behind making the film". "We would like to maintain that our intention was not to disrespect or hurt anyone's sentiments," the statement concluded. Talking about the film, the trailer was dropped by the makers recently and the mad act of Kangana Ranaut and Rajkummar Rao has left fans stunned. Judgemental Hain Kya is touted to be a crime drama and features Kangana and Rajkummar in lead roles. Directed by Prakash Kovelamudi, the story of the film is penned by Kanika Dhillon who also co-wrote the story of Manmazriyaan. Judgemental Hain is produced by Ekta Kapoor and is all set for a grand release on July 26th worldwide. Stay tuned to BL for more updates and scoops! JudgeMentall Hai Kya is scheduled to release on July 26.