Salman Khan and Zhu Zhu will definitely share a great chemistry if these pictures are anything to go by.

Tubelight is a story of two brothers played by Salman and Sohail Khan and their strong bond. But there is also a hint of romance in the film with Zhu Zhu playing the role opposite him. At least we believe so, although we don't know much about the plot. Earlier we shared with you a picture of Salman and Zhu Zhu mauling over a map perhaps to find out to shortest route to a destination. Now there's a continuation to that particular scene. We have another still which could be a behind the scene image, where the actors are having a hearty laugh. This makes us believe that there will be a few light romantic moments that the pair will share. Also Read - Bigg Boss 15: Nisha Rawal in talks with Salman Khan's controversial show; shares a cryptic post amid legal battle with Karan Mehra

Now you should not expect serenading romance here because that's not the point of Tubelight. It is essentially a story about a man who is a slow-learner and how he overcomes all odds to find his brother. It is set against the backdrop of the Sino-India war and thus will have traces of that period as well. Now, while we are getting very hopeful about their chemistry on screen, Salman is taking time to get over how beautiful she is. At least his post says so....

Tubelight: Salman Khan is seen with Zhu Zhu and Matin Ray Tangu in this behind-the-scenes still

Now check out the previous image... Also Read - Pathan: Makers of Shah Rukh Khan-Deepika Padukone starrer rope in THIS actor to reprise his role from War? 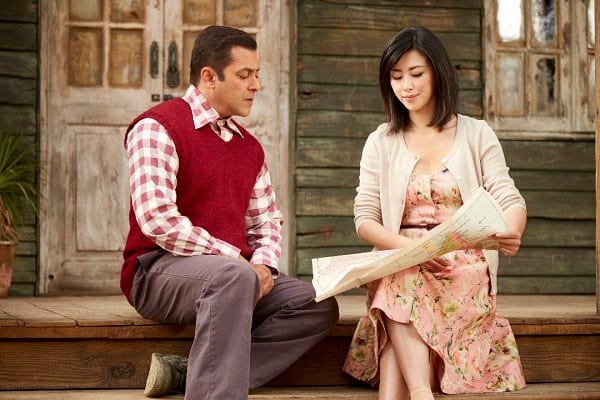 We told you how Salman Khan had turned Hindi tutor for Zhu Zhu. She tried to acquire the diction as well and when she started faltering, our Dabangg Khan came to her rescue. He would read lines with her and even came up with some innovative ideas to make her get it right. Zhu Zhu couldn’t have asked for a better teacher than Salman to learn Hindi from. The comfort between the two is evident.