Is Hrithik Roshan's Kaabil worth a watch? Does Sanjay Gupta deliver as a filmmaker? Read Kaabil movie review to find out... 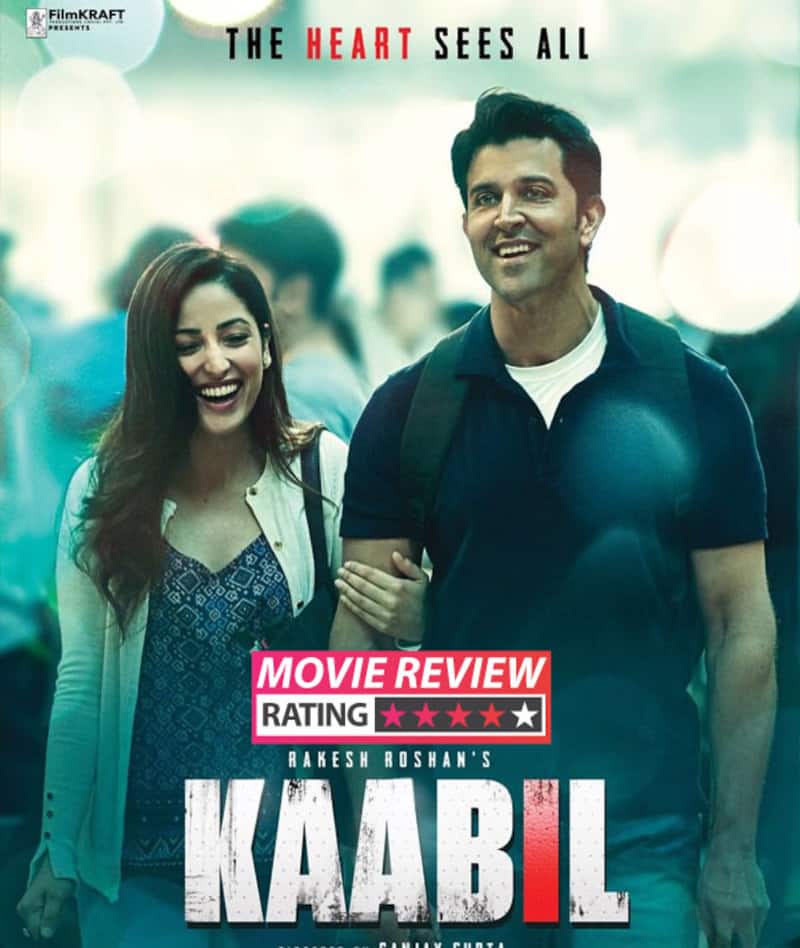 Hrithik Roshan and Yami Gautam's Kaabil will hit the theatres tomorrow morning on January 25. The film is a revenge drama and it's the first time Hrithik and Sanjay Gupta collaborate on a film. It is also the first time we see Yami and Hrithik together on 70mm. While the response to this latest Rakesh Roshan production venture promos has been great, we decided to give you a lowdown on whether you should spend your money and time to watch Hrithik's latest outing at the theatres... Also Read - Shah Rukh Khan, Kareena Kapoor Khan, Aamir Khan and more Bollywood actors who have weird clauses in their contracts

What's it about Also Read - Sussanne Khan and Arslan Goni wedding: Here's what the latter has to say about his plans to get married

It isn't the first time we are watching an actor play a visually impaired character on screen. Naseeruddin Shah and Om Puri both wowed us with their impeccable acts in 1980's Sparsh. The challenge of playing a character with a physical disability, in this case visual impairment is massive. It is not so much to do with the way the character is moving or walking, but it's a mind game - how does he behave, respond and act under the situations he is put in. These intricacies and subtleties of approaching a character aren't taught in any film school, neither can you ape it by watching any other performance. In Kaabil, Hrithik plays Rohan Bhatnagar - a visually impaired guy who doesn't let his shortcoming become his identity. He decides to marry Supriya (Yami Gautam) who too is blind and they both dream of buying the ideal house and living a normal life. Things turn bad when a local politician Madhav Shelar (Ronit Roy) and his brother cast their evil eyes on Rohan and Supriya's love story. From this point onwards, Kaabil becomes a revenge drama, one man's fight to dish out his own justice to those who did wrong to his loved one. Also Read - Worst Dressed Celeb of the Week: From Alia Bhatt to Urvashi Rautela — These divas get a big thumbs down thanks to their disastrous fashion choices

Hrithik Roshan takes his biggest career risk with Kaabil. For an actor whose name is synonymous with good looks, vanity and superstardom, to play a simple ordinary guy who isn't bothered by the way he looks on screen or how many packs he has hidden behind his shirt, for him Kaabil is a huge risk. Does it pay off ? Yes, by leaps and bounds. Kaabil works simply because Hrithik takes it to another level. His honesty and openness in letting us get a glimpse of Rohan's world is endearing. Right from the opening frame where we watch Rohan make breakfast to the very last scene you are spellbound by Hrithik's craft. You are waiting for him to mess up, or maybe there will be a flaw and he will get out of character, look in the camera, but that doesn't happen even for a second. Kaabil also works because you watch characters and not caricatures. Hrithik and Yami's chemistry is outstanding the idea to cast these two opposite each other just fantastic. Sanjay Gupta's style is sexy yet tame. He doesn't go all out with lighting up the frames or focussing on the VFX, instead the spotlight is on the script and building up a strong narrative. Brothers Ronit and Rohit Roy shine in their roles and bring in the right baddie sauce to the dish. The dialogues are crisp and Hrithik's monologue just when the interval sets in will get the theatre up on their seats. Also Rajesh Roshan's soundtrack is a throwback to the 90's when melody reigned supreme. Urvashi Rautela's item song Haseeno Ka Deewana provides the right welcome break to an otherwise serious scenario.

Kaabil has a lazy first half and we wished the pace picked up early on. The VFX in some scenes is botched up and Mumbai's familiar terrain (Marine Drive scenes) is mismatched with some unnecessary props. Yami's scenes in the second half and her dialogues with Hrithik also feel forced. Kaabil is dark and violent. There is very little scope for relief and humor in this script. That can become tiresome after a while.

Kaabil is Hrithik Roshan's career best performance. Watch and marvel at what can easily be termed as the finest performance to come out of Bollywood in a long time.