What is the reason for Parth’s happiness? Read on to know more!

Parth Samthaan is not keeping well these days. BollywoodLife informed you guys earlier that the Kaisi Yeh Yaariyan actor had been admitted in the hospital, following severe viral fever. The actor is undergoing treatment but his spirits are not low. Infact, Television’s heartthrob is feeling “happy” and “motivated.” But why? Well that’s because two of his shows have topped the TRP charts this month! Also Read - Nia Sharma, Pearl V Puri, Parth Samthaan and more — Comebacks of 10 TV actors we are waiting for in 2022

We all popularly know Parth as the cutie Manik from MTV’s hit series Kaisi Yeh Yaariyan. The actor also hosts Zing channel’s show Pyaar Tune Kya Kiya along with actress Smriti Kalra. This series is number one on the charts followed by Parth’s KY2. The actor tweeted a picture of the numbers along with a tweet writing,” Now this is something that makes me happy n motivated ..... Both the shows are on the top” Also Read - Trending TV News Today: Mohit Raina's secret marriage; Anupamaa aka Rupali Ganguly's Vaishno Devi trip, Parth Samthaan-Niti Taylor's reunion and more 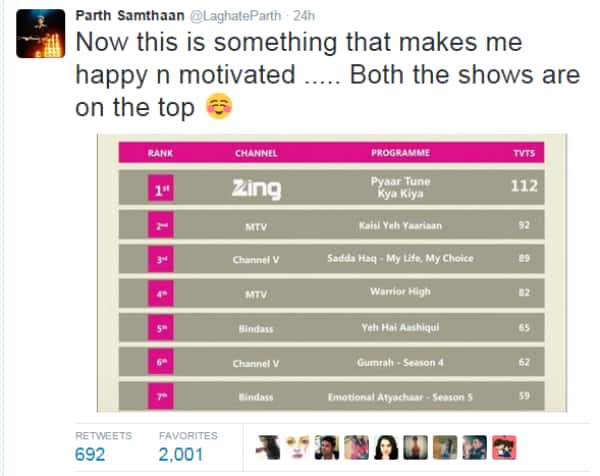 This is surely good news for the actor. The timing couldn’t be better as Parth is ill and this achievement is definitely the best morale booster, right? BollywoodLife congratulates Parth for attainment and wishes he continues to rock the charts with his charm, talent and popularity!