Besides Kangana Ranaut, Bollywood biggies like Hema Malini, Boney Kapoor, Subhash Ghai, Satish Kaushik, Madhur Bhandarkar, Ashok Pandit and others have taken to social media to rally behind ZEEL remaining indigenous, and voicing disapproval of Invesco's intentions to take over

Zee Entertainment has been at the front and center of the entertainment industry in India as also the prime driving force behind setting up the entertainment media sector. It's all about Indian entertainment at its heart, touching billions of Indian hearts day in and day out for years to come. In such a scenario, many big Bollywood stars and other popular names from the film industry have expressed concern over recent reports that ZEEL may be taken over by Invesco, its primary share holder, after word of ZEEL's merger with Sony got out. Names like Hema Malini, Boney Kapoor, Subhash Ghai, Satish Kaushik, Madhur Bhandarkar, Ashok Pandit and others have taken to social media to rally behind ZEEL, supporting, the merger with Sony, and voicing disapproval of Invesco's intentions to take over. Also Read - Akshay Kumar's Khiladi, Ajay Devgn's Golmaal Returns and more Bollywood movies unofficially inspired from older Hindi films

Now, Kangana Ranaut is the latest to join the chorus of solidarity, effusing praise on both Zee Entertainment Chairman and founder, Dr. Subhash Chandra as also CEO Punit Goenka. Check out her post below:

ZEE TV,first Indian channel cultivated by @subhashchandra to India’s biggest entertainment company has always been pioneer in Indian content.I wish that it continues to progress under the leadership of @punitgoenka & an all Indian Management and pray for a great future for them.

Is it giving a wrong signal to future corporate culture?

#ZeeTV hs bn one of the major pillars of Indian entertainment industry .
Its @subhashchandra ji’s vision which created so many job opportunities who r entertaining the country since a decade .
Let’s nt allow #American & #Chinese investors to destroy its strength. @punitgoenka 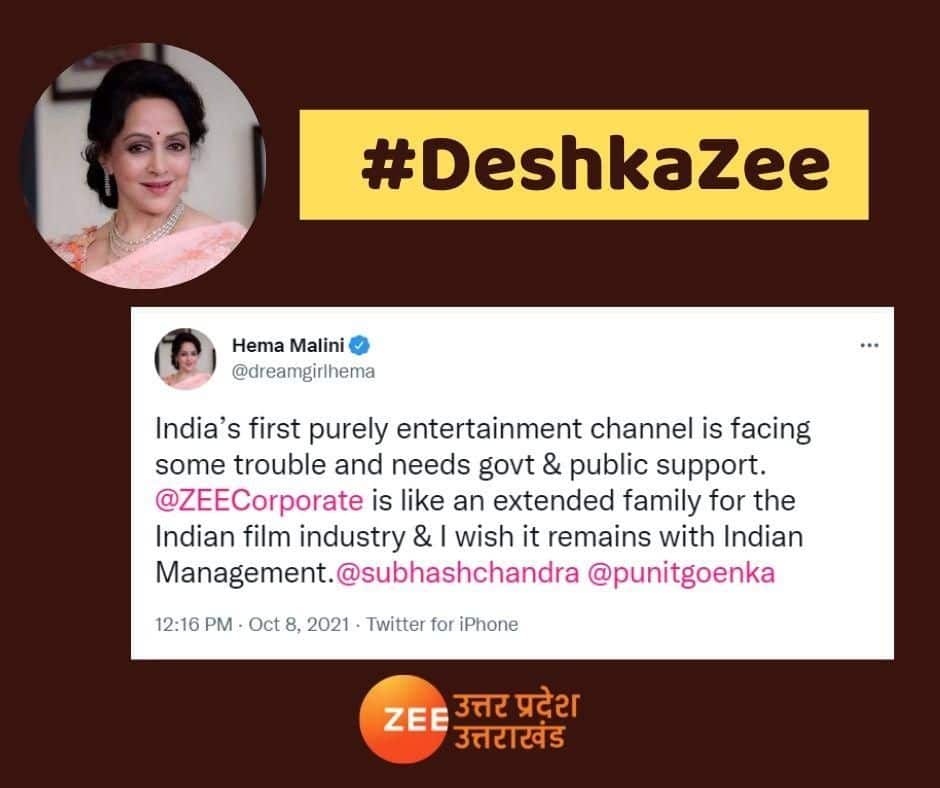 Also Read - Dhaakad: Kangana Ranaut is bruised in this UNSEEN picture from the sets; director calls her ‘Talent Extraordinaire’

Weighing in on the matter, Subhash Chandra had said, “nvesco is trying to take over ZEEL by illegal means. This is very wrong. I don't know if China is trying to do this, but this won't happen at any cost. The government of this country and the laws of this nation will never let the takeover of ZEEL happen by Invesco.”

Zee was launched at a time when there was only Doordarshan in India. So there was a gap to be filled, which ZEE did.

A channel-like Zee TV can not be created by spending even Rs 10 lakh crore.

Invesco should behave like a shareholder, not the owner.

Invesco deals in dollars, we deal in rupees. This is a clear-cut case of company takeover in a clandestine manner, which is not legal.

Only the Zee network provides content which everyone can watch with their families.
I don’t think the takeover will happen.

If you want to takeover, offer 75% to the shareholders. We will welcome that. But don’t try to do it by illegal means.

I trust the people of this country will not let Zee down.

There is definitely someone in India who is backing Invesco. I do not want to make a guess on that.

We have made mistakes along the way and I have paid for it. But I have welcomed criticism positively.

It was just meant to be, that’s how Zee happened. People gave Zee meaning. I can not repeat the feat today, even if I wanted to.

Though Sony is a foreign company, they have offered a good deal. Their intent is good.

This is a clearcut case of company takeover in a clandestine manner. Invesco's trying to take control of the company by exploiting legal loopholes.

ZEEL has been a pioneer for the Indian entertainment industry ever since its inception in 1992 and a shining beacon for spearheading entertainment news coverage in the country and it must stay that way.