Kangana Ranaut cannot stop praising Mrunal Thakur for her role as Sita Mahalakshmi in Sita Ramam. Check out what the actress has to say about Mrunal right here. 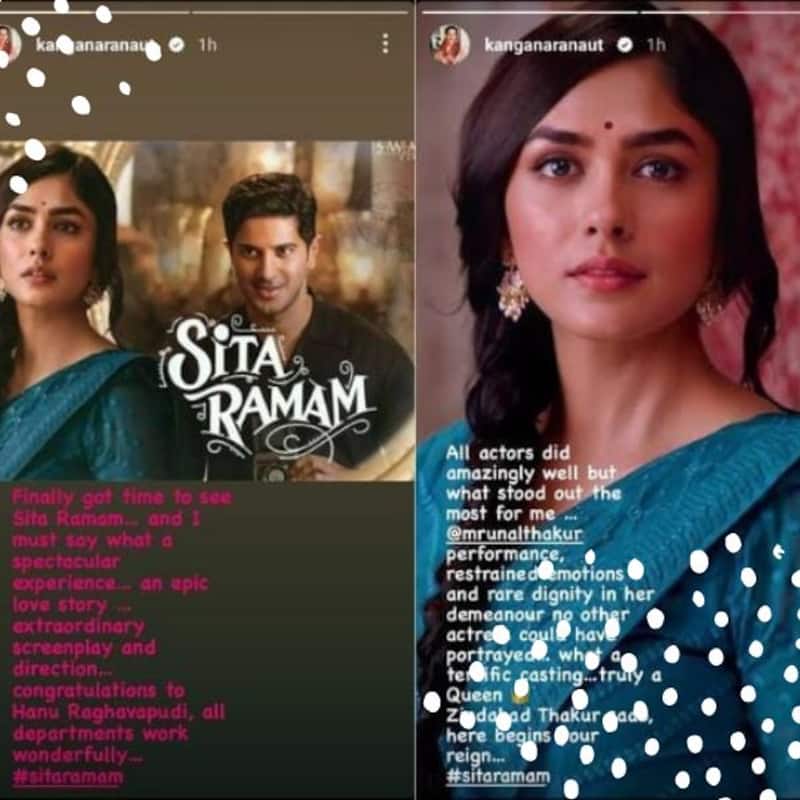 Bollywood actress Kangana Ranaut lately watched Mrunal Thakur and Dulquer Salmaan's movie Sita Ramam. The actress is occupied filming her next movie Emergency, in which she is the director as well. The Queen actress took to her Instagram stories to write excellent words about Sita Ramam. In the texts posted by her, she wrote that the movie has an ‘extraordinary screenplay and direction’. She also praised Mrunal and wrote that there could not be any other actress who could essay the role of Princess Noor Jahan aka Sita Mahalakshmi, as Mrunal did. Also Read - Trending Entertainment News Today: Emraan Hashmi on stone pelting incident, Kangana Ranaut's fresh dig at Brahmastra and more

The romantic movie in the Telugu language has been written and directed by Hanu Raghavapudi. It showcases Dulquer who essays the role of Lieutenant Ram, who is an Indian army officer posted in Kashmir. He gets an unknown love letter from Sita Mahalakshmi, essayed by Mrunal. Also Read - Kangana Ranaut slams Karan Johar over reports of Brahmastra overtaking The Kashmir Files at the box office; calls them 'mafia minions'

Kangana reviewed the movie and wrote that everyone's performance was extraordinary, however, Mrunal's performance was the cherry on top. She called the actress a queen and wrote 'Zindabad thakur saab' (madam). She also posted a queen emoji with her. The actress also said that for her it was a spectacular experience and she adored the love story, screenplay and direction. She congratulated the director Hanu Raghavapudi and the entire team for the great work. Also Read - From Kangana Ranaut’s Dhaakad to John Abraham’s Attack; these movies flopped at the box office but became hit on OTT 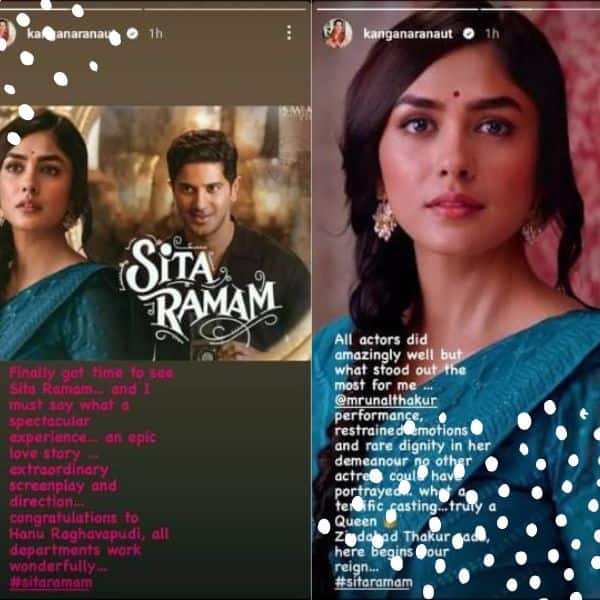 Sita Ramam team lately also received from Poland where a fan showcased love for the movie. Both Dulquer Salmaan and Mrunal Thakur reacted to the long letter, by Monika who is a fan. Her Twitter bio read that she is a Polish fan of Indian cinema and music since 2006.

Check the tweet posted by Monika on Sita Ramam here: