Kangana Ranaut vs Alia Bhatt: Fans side with THIS actress in the Gangubai Kathiawadi controversy - VIEW POLL RESULT

Kangana Ranaut's objection to the Choti Alia Bhatt's imitation of Gangubai Kathiwadi had sparked a debate among social media users about exposing children to adult content.

A few days ago, Kangana Ranaut had slammed the video of a little dressed as Alia Bhatt's character of Gangubai Kathiawadi from Sanjay Leela Bhansali's upcoming movie. The girl, who is called as Choti Alia Bhatt by social media users, was was seen mouthing Alia's dialogues and imitating her actions of holding a 'beedi' as shown in the film's trailer. Kangana had strongly objected to it and slammed the girl's parents for allowing their child to have access to the content which is meant for an adult audience. Also Read - Ranbir Kapoor already shopping for Alia Bhatt and his baby? Here's what we know

"Should this child imitate a sex worker with a beedi in her mouth and crude and obscene dialogues? Look at her body language, is it ok to sexualize her at this age? There are hundreds of other children who are being used similarly,” Kangana shared a note on Instagram. Her objection to the Choti Alia Bhatt's imitation of this particular scene sparked a debate among social media users about exposing children to adult content. Also Read - After Alia Bhatt, Ranbir Kapoor announce pregnancy, nani Soni Razdan shares THESE gorgeous, UNSEEN pics of the couple

We had conducted an audience poll to determine what people think about Kangana's stand against the little girl's video. And a thumping majority of the audience (71 per cent) agree with Kangana's thoughts that such actions pollute young minds, while the remaining 29 per cent voted that there's no harm in enacting onscreen characters since it's just a portrayal. Also Read - Alia Bhatt-Ranbir Kapoor pregnancy: Here's how the couple's exes reacted to their baby announcement 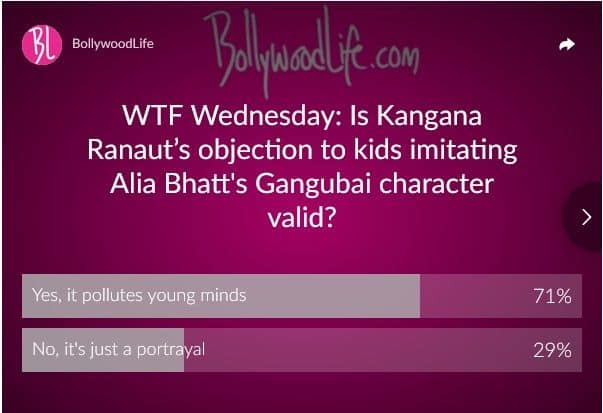 Responding to the controversy, Kangana said that at the trailer launch of Lock Upp in Delhi, "Jo 6-7 saal ke bachche hai, woh kisi tarah se exploit ho rahe hai, jab main unki baat kar rahi hoon (When I am talking about 6 or 7-year-olds being exploited), I don’t think it is to harm anybody in terms of business or the money that they are going to make."

Kangana further added that she was giving her opinion "in the interest of the girl children who are being exploited to imitate TikTok videos and imitate a sex worker with a beedi in her mouth. So, you think that just because it doesn’t serve somebody’s purpose economically, my voice should be shut? Nobody’s voice should be shut.”