As Kangana Ranaut shared the video of her riding a horse, netizens began commenting on her post that it reminded them of Majnu bhai's painting from Welcome leaving everyone in splits.

Kangana Ranaut was massively trolled after her behind-the-scenes video from Manikarnika wherein she was seen riding a mechanical horse had surfaced online. And once again, the ghost from her past came back to haunt her after she posted a new video of her while riding a horse. Also Read - Before Bigg Boss OTT, a look at Kangana Ranaut, Twinkle Khanna and others who said the meanest things to Karan Johar on Koffee With Karan

In the video, Kangana was seen wearing an orange T-shirt and black pants as she circled around the track while riding a horse. Many people praised her for her horse riding skills and showered love upon her. However, there was a certain section of the online users who couldn't stop talking about how Kangana's horse riding video reminded them of Majnu bhai's painting from Welcome. Also Read - Ranveer Singh, Kangana Ranaut, Aishwarya Rai Bachchan and more controversial Bollywood photoshoots that'll leave you shellshocked

Anil Kapoor played the character of Majnu bhai, a gangster who thinks he has top-notch painting skills and can paint anything and everything but ends up drawing something unexpected. His painting from Welcome had become everyone's favourite. It featured a donkey riding a horse, which is a sign of great love, as described by Majnu bhai in the film. Also Read - Throwback: When filmmaker Mahesh Bhatt threw 'chappal' at Kangana Ranaut as claimed by actress' sister Rangoli Chandel

As Kangana shared the video, netizens began commenting on her post and left everyone in splits. Take a look. 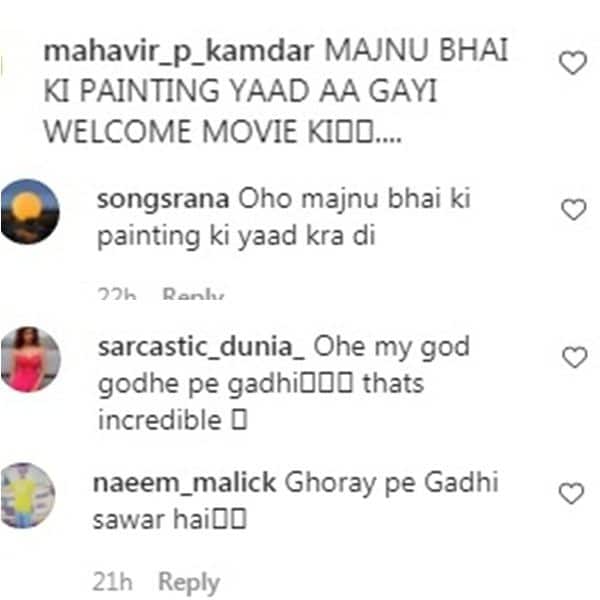 On the work front, Kangana will be seen in the film Thalaivi. The film's release was postponed due to the Covid-19 pandemic. She is also part of the films Tejas and Dhaakad, and recently announced a film under her banner Manikarnika Films titled Tiku Weds Sheru.