Kareena Kapoor Khan enjoys delicious food ahead of delivery; gifts keep coming in for the baby

Kareena Kapoor Khan is all set to deliver her second baby but before the angel arrives, she is enjoying every bit and having delicious food. Meanwhile, the gifts are coming in for the baby.

We will soon get to hear the good news from Kareena Kapoor Khan. The Veerey Di Wedding actress is all set to deliver her second baby. Earlier, her family members were seen at her new home. There have been rumours that Kareena is in the hospital and will soon deliver her baby. Yesterday she was spotted arriving at sister Karisma Kapoor's house along with Taimur Ali Khan. Kareena Kapoor Khan's second baby was due to arrive on Valentine's Day but we guess that it took its own sweet time. However, before the baby arrives Kareena Kapoor Khan is in no mood to rest. She goes on working and getting photo shoots done. The actress is also enjoying delicious food and receiving a lot of gifts from her friends and family. Also Read - Aadar Jain opens up on cousin Kareena Kapoor Khan's newborn, why he hasn't met him yet, and the pressure of hailing from a film family [EXCLUSIVE]

Kareena shared pictures on her Instagram story and it seems she is completely enjoying it before her little angel arrives. Take a look at her Instagram stories below: Also Read - After Bhool Bhulaiya and Hungama, a third Priyadarshan hit film to get a sequel? Here's what we know 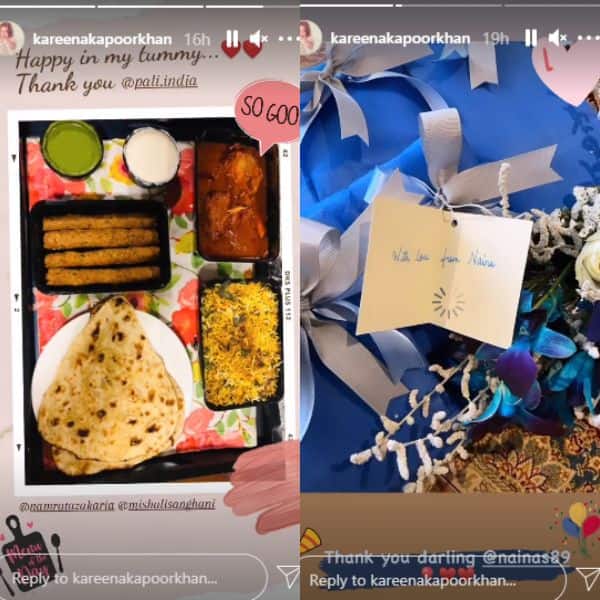 Also Read - OMG! Kareena Kapoor Khan REVEALS she piled on THESE MANY KILOS after her Tuscany holiday with Saif Ali Khan and Taimur

This time Kareena Kapoor Khan and Saif Ali Khan do not want paparrazis to be around their baby like they were while Taimur was born. Earlier, a source told BollywoodLife, "Taimur is very small now and at this stage kids are very possessive about their parents and want all their love to themselves. So, Kareena has been making every effort necessary to ensure Taimur is aware of the arrival of his new sibling and is having conversations with him about the baby everyday, explaining to him that a little friend is on the way to give him company for life. Furthermore, she has planned several playdates with Taimur and his cousin, Inaaya Kemmu (Kunal Kemmu and Soha Ali Khan's baby girl), as after the arrival of the newborn, Kareena will be dedicating herself full time to the infant's care just as she had done for Taimur. In the interim, Saif, maasi Karisma Kapoor and papa Saif will be around Taimur to smoothen the transition phase."