Kareena Kapoor Khan celebrates her 41st birthday today and we are expecting some special announcement from the actress on her special day.

The gorgeous superstar of Bollywood, Kareena Kapoor Khan, who is fondly called as Bebo by the industry and fans, is celebrating her 41st birthday today. While the actress is expected to announce something special related to her professional work as a treat for fans, Kareena has shared a pic on her insta-story of a breathtaking view and wrote, "Uff Kya Raat Aayi Hai". Well, we definitely think Saif Ali Khan must have planned something special for his wifey on her super special day and this gorgeous view is just a small part of it. Also Read - THESE 14 blockbusters starring Shah Rukh Khan, Alia Bhatt, Prabhas, Rani Mukerji and more are the most rejected Bollywood films of all-time 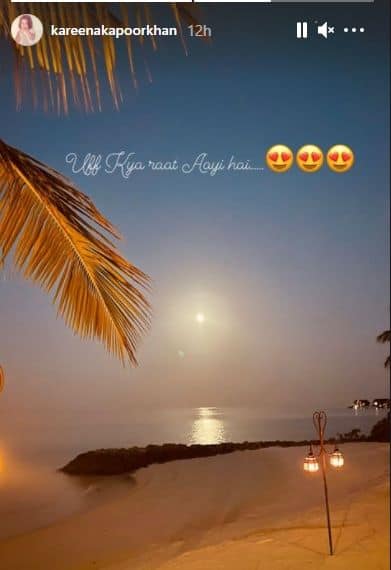 In the last week, Kareena Kapoor was spotted at the airport with husband and kids as the family was heading for a vacation and cute pics of little munchkin Jeh went viral on social media. Also Read - Aamir Khan gets trolled for new firecrackers ad; BJP MP claims it's creating 'unrest among the Hindus'

On the professional front, Kareena Kapoor will be next seen in Aamir Khan's Laal Singh Chaddha. Talking about the film, it is inspired by Tom Hanks' blockbuster Forrest Gump, which was based on a 1986 novel by the same name, written by Winston Groom. Tom Hanks played the lead character alongside Robert Wright and Gary Sinise. The movie received several accolades and was the biggest hit of that year. Forrest Gump swept the Academy Awards for Best Picture, Best Director, Best Adapted Screenplay, Best Visual Effects and Best Film Editing. Meanwhile, Hanks was applauded for his performance with a Best Actor Oscar award. The movie also performed well at the Golden Globes, People’s Choice Awards, and Young Artist Awards. It is written by Atul Kulkarni and directed by Secret Superstar helmer Advait Chandan. Also starring Naga Chaitanya Akkineni and Mona Singh, it is set to hit the screens on Christmas 2021.