After enjoying her vacay in London recently with filmmaker Karan Johar, Kareena Kapoor Khan returned to the city few days ago and got back to her routine. We got pictures of the actress outside her gym looking fresh as ever. She wore a neon green top with words, "Nope. Not today" written on it. The colour instantly took us back to the Tashan days. We all remember the neon green bikini that Kareena, who was size zero back then wore in the film, right? It is a sight for sore eyes even today. Co-incidentally, Kareena's best friend Malaika Arora too wore the same coloured top to her gym. And it called for a poll on our site. We asked you, dear readers, that who out of the two ladies rocked the neon green top better. And well, the verdict is out. Also Read - Bollywood TOP actresses and their bizarre conditions before signing movie contracts

68 per cent of fans have voted for Kareena, while the rest 32 per cent were impressed with Malaika's outfit. Check out the poll results right here: ALSO READ: Kareena Kapoor Khan’s neon green gym top reminds us of her Tashan bikini Also Read - Bollywood celebs who LEAKED their WhatsApp chats in public 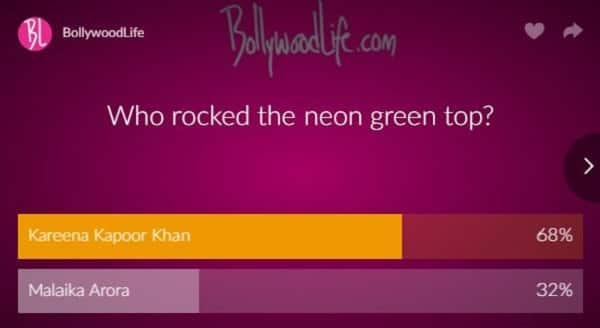 On the work front, Kareena is all set to be back on the big screen with Veere Di Wedding, which also stars Sonam Kapoor and Swara Bhasker. The film is produced by Sonam’s sister Rhea Kapoor and Ekta Kapoor. It is scheduled to hit the theatres on June 1.

As for Malaika, she is on the cover of March issue of The Peacock magazine. And needless to say, she looked extremely hot on the cover. Stay tuned to BollywoodLife for all the latest goss from B-Town and tellyland.