Karishma Tanna on the cover of Verve's supplement issue, hot or not? Vote!

The former Nach Baliye 7 contestant has been featured on this month's supplement issue of Verve. Do you like her look? Tell us!

Karishma Tanna is one the most stylish TV celebrities on the block. Where most TV actors fail to set style statements with their over-the-top and flashy attires, Tanna gets it right all the time. We all remember her fashionable avatar on Bigg Boss 8 where the beauty was seen a contestant. Be it western clothe or Indian, Karishma proved to be the most stylish Bigg Boss inmate in the house. The leggy lass is currently away in New York with her better half Upen Patel. The two were last seen as one of the finalist jodis in Nach Baliye 7 and are away on a much needed break. Karishma has been associated with the Television industry since several years and has explored her roots in Bollywood as well. She is all set to be seen in Tina and Lolo alongside Sunny Leone. Like many other leading ladies in Bollywood, Karishma too has been featured on this month's supplement issue of Verve! Also Read - Pearl V Puri Case: BFF Karishma Tanna says 'He had to get bail' after the actor returns home from jail

The actress posted an Instagram post about the same writing," My verve covers out in stores..go get ur copy now! #instagood #follow #fashion #livelife #goodlife…” Also Read - Pearl V Puri Case: The Naagin 3 actor gets bail after being in custody for 11 days 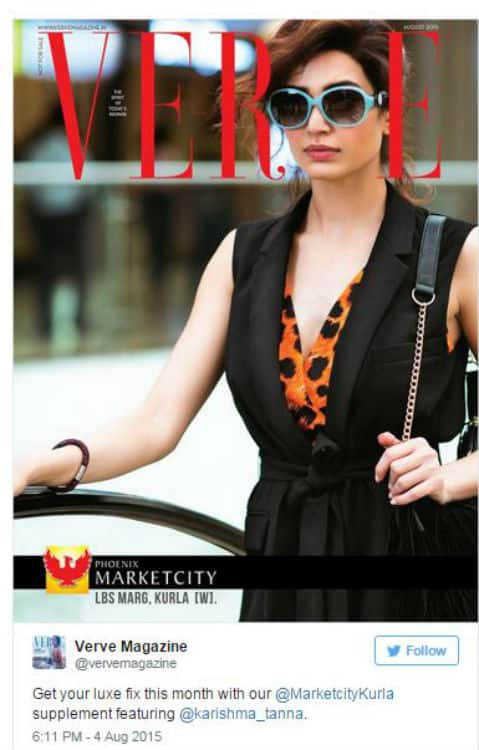 Also Read - Worst Dressed: Debina Bonnerjee, Karishma Tanna and other divas get a THUMBS DOWN for their fashion choices – view pics

The beauty is seen sporting a black dress with an animal printed inner and blue bordered shades. The actress has finished her look with a suave sling bag. We think Karishma looks rather chic and trendy! What do you have to say about her look, hot or not? Tell us by posting in the box below!