Yesterday (March 11) was a very special day for Karisma Kapoor as her daughter, Samaira entered into her teens. Obviously then her 13th birthday was celebrated with a big party. Karisma's ex-husband and Samaira's father, Sanjay Kapoor joined the celebrations too. Some pictures from the party have made their way to social media and needless to say, the family had quite a lovely time with each other. Karisma too posted a lovely throwback picture with Samaira and a recent one too on her Instagram account. The actress gave us a glimpse of the celebrations as she posted some pictures of the decor and the cake on her stories. Also Read - Raj Kundra porn films case: Will Shilpa Shetty return to Super Dancer 4 as a judge? Here's what we know

Check them out right here: Also Read - Super Dancer Chapter 4: After Shilpa Shetty leaves midway, here's the first glimpse of Karisma Kapoor as a guest judge in her place

Inside pics from @thesamairakapur birthday bash. Samaira Kapur celebrated her 13th birthday yesterday and parents Karisma and Sunjay threw a bash for her. ? How stunning is Samaria, that grace and charm, she has transformed in to a beautiful girl..like mother like daughter. ???? ? #KarismaKapoor #SamairaKapur 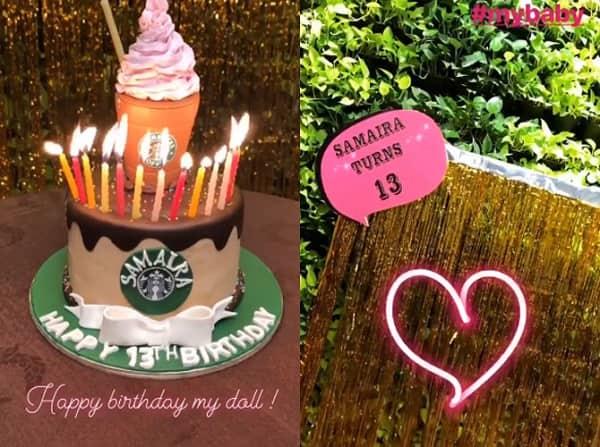 Also Read - Super Dancer Chapter 4: Is Karisma Kapoor stepping up for Shilpa Shetty on the show? Here's the TRUTH

Samaira seems to be a coffee lover as her birthday cake was Starbucks inspired. From the looks of it, it seems like a Tiramisu cake. The cake looks yummy, doesn't it? Sanjay and Karisma got divorced in 2016. The custody of Samaira and Kiaan went to Karisma. However, Sanjay has been granted visitation rights to meet his kids. Currently, Karisma is said to be dating a businessman, Sandeep Toshniwal. Word has it that they will tie the knot very soon. On the other hand, Sanjay is married to Priya Sachdev, who was earlier married to hotelier, Vikram Chatwal. ALSO READ: The cost of Karisma Kapoor’s sling bag is equal to the cost of 15 shirts owned by Jacqueline Fernandez

What are your thoughts on these pictures of Samaira's 13th birthday celebrations? Let us know in comments below and stay tuned to BollywoodLife for all the goss from B-town.