On the work front, Karisma made a special appearance in Aanand L Rai's Zero which featured Shah Rukh Khan, Katrina Kaif and Anushka Sharma in lead roles. The actress' last film where she had a full-fledged role was Dangerous Ishhq.

Karisma Kapoor celebrates her 45th birthday today and she is making most of her trip by enjoying in the exotic locations of London. All this while, Lolo partied hard with her sister Kareena Kapoor Khan and went on a shopping spree with her friends and Bebo. Today being her special day, Karisma had her priorities straight and spent time with her mother Babita and sister Kareena. As usual, the Kapoor sisters clicked a lot of pictures but Lolo made sure to post the best ones on social media. Karisma took to her Instagram handle and shared a picture with the Jab We Met where they can be seen chilling together. Next, she shared a cute fam-jam pic with her mom Babita and captioned it as, "Like mother, like daughters." Also Read - An excited Taimur Ali Khan dashes into a glass door as Kareena Kapoor Khan, Babita and Randhir reach Karisma Kapoor's home

When we mentioned that the Kapoor sisters clicked a lot of pictures, we actually meant it. Lolo was on a photo-sharing spree. Soon, the actress shared her selfie with a caption that read, "Looking Ahead." In yet another photo by Karisma, we can see a cup of coffee and some delicious pastries kept on a table. Looks like, the actress has planned her birthday perfectly. And we are sure, her family will take her by surprise too. Also Read - Karisma Kapoor and mother Babita drop by Kareena Kapoor Khan's house to spend time with her new baby — view pics

The #Kapoor sisters having a great time on #London with their mother #babita . #SaifAliKhan may not be in the frame but he might be the one who clicked these. #KareenaKapoor #kareenakapoorkhan #KarismaKapoor 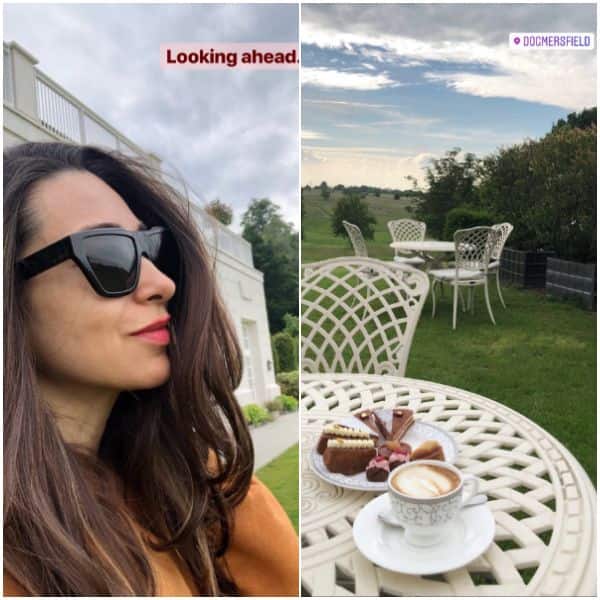 On the work front, Karisma made a special appearance in Aanand L Rai's Zero which featured Shah Rukh Khan, Katrina Kaif and Anushka Sharma in lead roles. The actress' last film where she had a full-fledged role was Dangerous Ishhq, which released in 2012. It's been a long time and we hope Karisma does a film soon.

As for her sister Kareena, she will be seen in Good News with Akshay Kumar, Diljit Dosanjh and Kiara Advani. Apart from Good News, Bebo will essay the role of a cop in Irrfan Khan and Radhika Madan starrer Angrezi Medium. Also, Kareena has Karan Johar's Takht, Lal Singh Chaddha lined up. Word is that she will play Saif Ali Khan's ex-wife/ girlfriend in Jawaani Jaaneman.