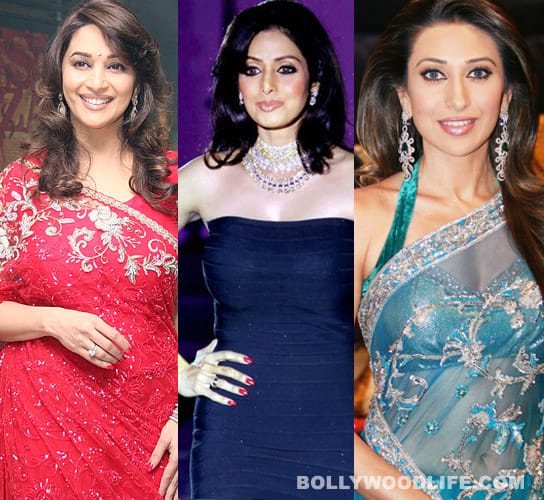 Bollywood no longer sees a heroine’s advancing years as a liability. This should let older actresses break the glamour mould and take on edgier roles

This month, Madhuri Dixit was the cover girl for Vogue and Sridevi for Marie Claire. These are somewhat unusual choices for fashion magazines—both women are over 40 and neither has had a successful film in almost a decade; in fact, Sridevi’s last major release was in 1997. But both were the Number One actresses of their time. They continue to be sparkling and attractive, and are now on the comeback trail. Sridevi is returning to films with English Vinglish. Madhuri is judging reality shows, endorsing products and a food channel, and presumably scouting for a film that can do justice to her talent.

Interestingly, they aren’t the only ones returning. Karisma Kapoor, 37-year-old mother of two, also recently announced that she was back after a five-year gap—she is playing the lead in a film called Dangerous Ishhq, which is reportedly a 3D horror film that takes place over five decades and has her playing five roles. Raveena Tandon, also a mother of two, recently played the lead in Bbuddah Hoga Terra Baap (she refuses to call it a comeback; in a newspaper interview she said: “When Julia Roberts or Sandra Bullock do one a film a year, it’s not called a comeback, is it?”). Meanwhile, 30-something Preity Zinta has launched her own production company and is making Ishq in Paris with herself in the lead. And other 30-plus heroines such as Kajol and Aishwarya Rai Bachchan are taking breaks to focus on family and children and not because they can’t find work.

It seems like a good time to be a Bollywood actress. Marriage no longer sounds the death knell of a career; filmmakers and viewers are willing to accept that mothers can also be alluring on screen; and 30 is no longer the sell-by date. Of course, these are minor concessions compared to the longevity and clout that actors enjoy—the three Khans, Aamir, Shah Rukh and Salman, have been at the top for 20 years and continue to demand serious paychecks and progressively younger heroines.

But it is a beginning.

And yet, applause for these baby steps forward feels premature. Yes, actresses have extended their shelf life, but none seems to be using the extra time to do something truly edgy or groundbreaking. None of the older actresses is in the race for the Number One crown—Katrina Kaif, Priyanka Chopra and Kareena Kapoor are fighting that duel—and yet, none seems willing to use the freedom to experiment. Thanks to Botox and killer gym routines, all are in great shape (some would say even better shape than they were in their prime) and they still seem stuck in the glamour girl groove. So, it is reported that Madhuri is insisting on a Rs 5 crore fee, Karisma is doing an item number in Housefull 2, while Preity is co-designing a signature black dress for her home production. Which is all well and good, but hardly memorable.

Why are actresses so risk-averse? A few years ago, I did an interview with Amitabh Bachchan, in which he said that he was thrilled to be relieved of the burden of being a leading man. As a character actor, he could experiment with all sorts of roles—from Babban Singh in RGV Ki Aag to a father in love with his teenage daughter’s friend in Nishabd. The films didn’t work but he stretched himself as an actor (interestingly, he had wanted to do Gabbar Singh’s role when the original Sholay was made). Of course, Bachchan discovered these off-beat and edgy roles after doing supposedly safer projects like Mrityudaata and Lal Baadshah, which tried to revive the Angry Young Man. Not surprisingly, the films were disasters.

I hope that some of our comeback heroines see the Bachchan comeback as a cautionary tale. They should skip the tried and tested, and instead go out on a limb and do roles that they always wanted to, but Bollywood didn’t let them. That would be progress.