Katrina Kaif is vibing high on devar Sunny Kaushal's latest post. The Tiger 3 actress dropped a sassy comment on the Shiddat actor's latest post and we are loving this devar-bhabhi equation a lot. Check out the post below:

December has been a firecracker month for Bollywood as it witnessed the Big Fat Indian wedding of Katrina Kaif and Vicky Kaushal. The pictures from which are still surfacing around on social media. Katrina and Vicky tied the knot in presence of their families and a few colleagues close as family to them both. Katrina Kaif and Vicky Kaushal's wedding was one of the most elaborate weddings of recent times with all the extravaganza in place. Everyone had turned up in designer outfits. Shiddat actor Sunny Kaushal, Vicky's younger brother and now Katrina's devar recently dropped a picture (we are guessing) from one of their wedding functions. He looks handsome in a Shantnu & Nikhil couture. And Bhabhi Katrina Kaif has dropped a sassy comment on his picture. Also Read - Ahem! Katrina Kaif finds Varun Dhawan's shirtless picture fiery hot; Vicky Kaushal are you listening?

Sunny is seen in asymmetric draped kurta, a waistcoat from the designers' Haute Couture. He captioned the post saying, "Pose like a king, dress like a warrior..." And the Zindagi Na Milegi Dobaara actress is impressed. She commented on Sunny's picture saying, "Vibe hai vibe hai." we are loving this Devar-Bhabhi equation. First things first, check out Sunny's post here: Also Read - Deepika Padukone, Akshay Kumar, Tiger Shroff and more Bollywood Daredevils who have done their own stunts in films 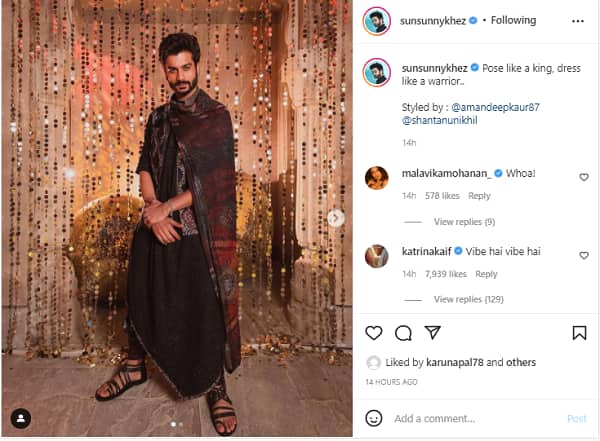 On the job front, Sunny Kaushal's performance in Shiddat co-starring Radhika Madan impressed the audience. He is working on Hurdang which also stars Nushrratt Bharuccha in the lead. Hurdang is a romance film helmed by Nikhil Nagesh Bhat. The other cast includes Vijay Varma, Viraj Kapoor, Nitanshi Goel to name a few.

Katrina, on the other hand, has Phone Bhoot with Ishaan Khatter, Siddhanth Chaturvedi. She also has Jee Le Zaraa with Alia Bhatt and Priyanka Chopra. The actress announced her new project Merry Christmas for which she'll be collaborating with Vijay Sethupati for the first time. She is gearing up to wrap Tiger 3 with Salman Khan after a long break due to the wedding.