Katrina Kaif is a perfect fit for the desi remake of Kill Bill, say fans!

A few days ago, BollywoodLife ran a poll asking its fans to vote for the actress they see as the best match to play the lead in Kill Bill's Hindi remake.

A few days ago, BollywoodLife ran a poll asking its fans to vote for the actress they see as the best match to play the lead in Kill Bill's Hindi remake. The choices we presented were Katrina Kaif, Priyanka Chopra and Deepika Padukone. The votes are in and the results are out. Katrina has emerged as the clear winner. Well, it comes as no surprise to us. Also Read - Katrina Kaif shares latest pictures from Maldives; calls it her happy place and we couldn't agree more

The remake rights of Kill Bill were bought by Nikhil Dwivedi recently. Though the official announcement of a lead heroine or even the desi remake is yet to come, we wanted to be the first ones to the party. Kill Bill is a popular two-part movie series by Quentin Tarantino, which stars Uma Thurman. The movie centres on Uma, only known as the Bride, who is out to brutally kill every person who wronged her. This involves fighting at least 40 assassins at the same time and killing them. Let us not forget that Katrina pulled off something very similar in her film, Tiger Zinda Hai. Also Read - After Priyanka Chopra-Nick Jonas announce arrival of baby, netizens slam writer Taslima Nasreen's 'readymade babies' comment 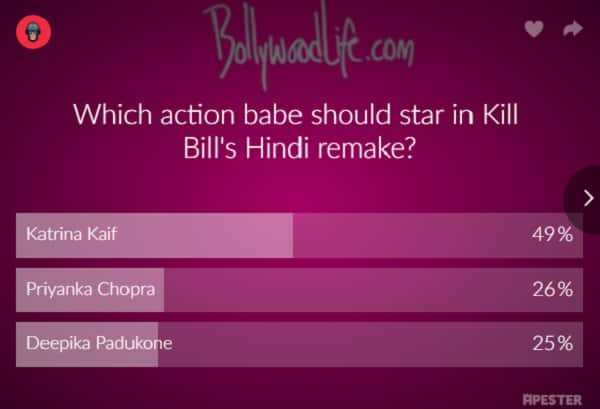 In TZH, Katrina enters a building and kills every terrorist there, looking deadly AF, while the song titled, Tera Noor, played in the background. So, we totally know that Katrina can pull off the character of Bride. Imagine having a whole movie only centred on Katrina's ability to kick ass. TAKE MY MONEY, NOW!

This won't be the first time that BollywoodLifers have picked Katrina Kaif as the winner in a fantasy casting. You guys have also voted for the actress when we asked you to pick as to who would ma