Katrina Kaif shared a pic with her favourite people on Instagram but she took down the pic, minutes after it was posted.

That's a tad bit odd! Katrina Kaif shared a pic with her "favourite people" but she took down the pic, minutes after it was posted. So the diva took to Instagram and put up a throwback pic from IIFA Rocks 2017 where she posed with Varun Dhawan and Alia Bhatt. She called them her "favourite people" and said how she missed them. But within three minutes of sharing the pic, she took it down. Now that's strange. This definitely made us wonder as to why she did what she did. Ever since the Dream Team Tour took place, Katrina, Alia, Varun, Sidharth Malhotra, Karan Johar, Aditya Roy Kapur and Parineeti Chopra have become quite good friends. Kat and Alia, especially, hit it off so well that they gymmed together and even partied together later on. So, with every gathering or Bollywood events, we have seen their camaraderie grow stronger. Also Read - Katrina Kaif, Sara Ali Khan, Salman Khan, Kareena Kapoor Khan and more: 10 Bollywood celebs who were caught flaunting love bites – view pics

At the India Couture Week, when Alia walked the ramp for Manish Malhotra with Ranveer Singh, she even told media, “The first time I actually came out in the public before ‘Student of the Year’ released was for Manish’s couture show here in Delhi when Katrina was walking. I was sitting in the audience and saying ‘Wow. One day, I want to be that person walking on the ramp." Well this says it! They have been fangirling over each other for quite a while now. The post may have been deleted from her Insta but we managed to get a grab of it! You can check it out below! Also Read - Tiger 3: ‘I work all the f**king time,’ Katrina Kaif’s training video shows how intensely she’s prepping for her third outing as Zoya 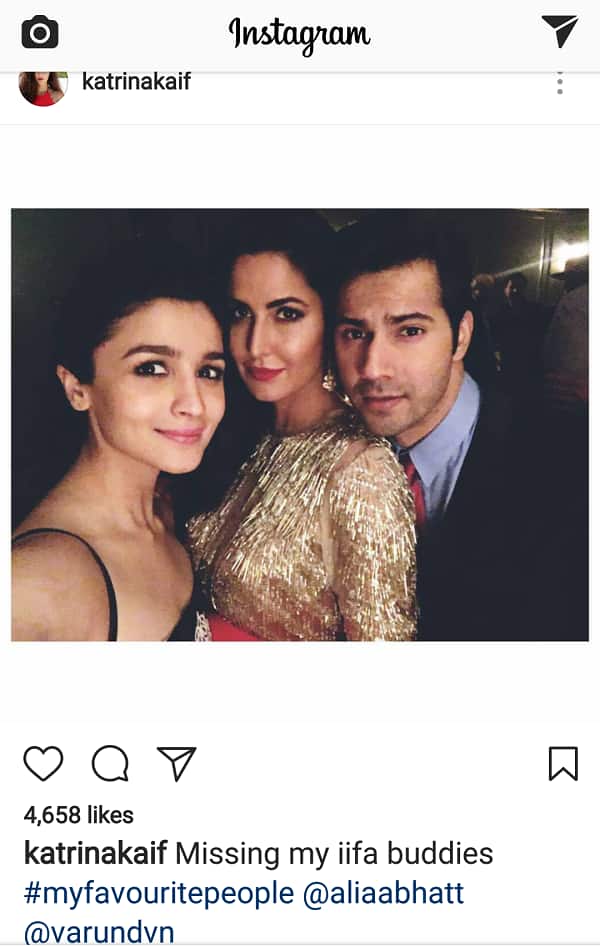 Currently Katrina is shooting for Tiger Zinda Hai with Salman Khan. In fact, the duo just returned from their Morocco schedule and will soon take off to Abu Dhabi to complete yet another schedule. Alia, too, is caught up with Meghna Gulzar's Raazi where she plays a 21-year old Kashmiri spy. Varun just wrapped up the final schedule of Judwaa 2. He has quite a lot of films in his kitty, just like Katrina and Alia. Damn, with such a packed calendar, we wonder when they'll be able to chill next. Anyway, can you guess what made Kat pull down her post? Write to us in the comments box below.

Stay tuned to this space for hot scoops and latest updates.