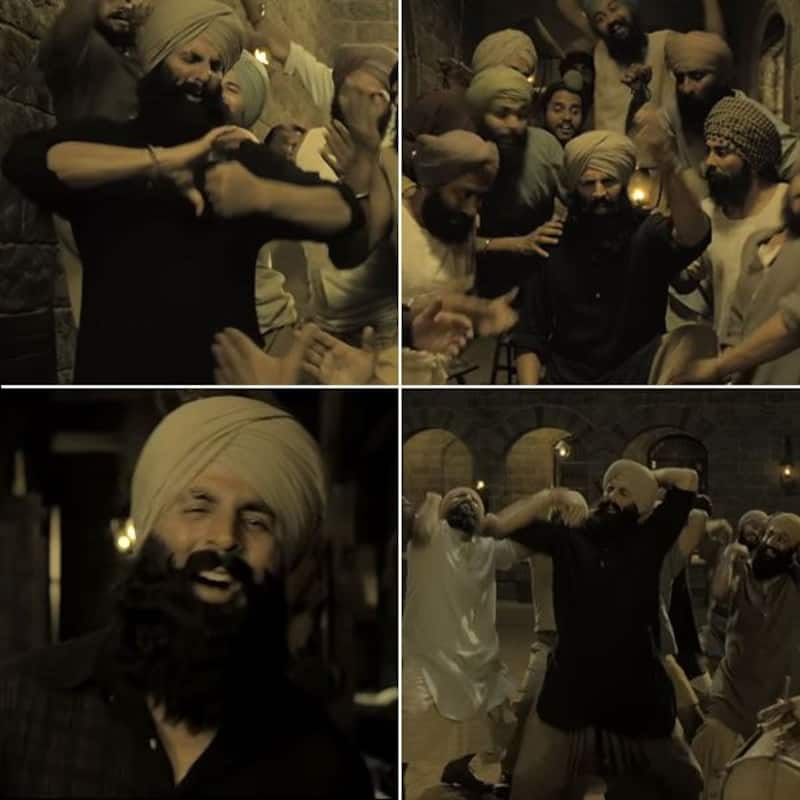 Days after he blew everyone’s mind in the trailer of Kesari, Akshay Kumar is getting everyone into the dance spirit with the first song of the movie. The actor, who plays a Sikh in the patriotic film, is singing and dancing to the tunes of Sanu Kehndi. The song has been sung by Romy and Brijesh Sandilya and the music has been given by Tanishk Bagchi. While the audio keeps everyone on their feet, the video serves as a fun watch as well. In the two and half minute clip, Akshay is seen having fun with his 21-member battalion. Also Read - Shah Rukh Khan, Disha Patani, Ranveer Singh and more: Bollywood actors and their lesser-known siblings

The song begins with a sad battalion member playing the iktara while the remaining members of the army try to cheer him up. It seems like he’s going through a breakup in the sequence. The song packs in dhols and folk Punjabi music, making it a good tune to listen to. The video sees the actor sans the kesari turban, as against his avatar in the trailer. Also Read - BTS: Kim Taehyung, Jungkook and other members turn Akshay Kumar, Suniel Shetty from Phir Hera Pheri as they groove on 'Aye Meri Zohrajabeen' [Watch Hilarious Video]

Check out the video below: Also Read - Kartik Aaryan has an epic reply when called 'a replacement star'; it'll win non-fans over

Director Anurag Singh was quoted as saying in an interview with DNA, “The song displays the bond that these 21 guys share. We just wanted to show them having fun before things get serious. Tanishk has based it on a folk tune from Punjab and created this lovely, peppy number that’s full of masti. Kumaar, who everybody knows is superb at writing Punjabi numbers with a great hook line, has penned the lyrics. The song will appeal to everybody.”

“It’s a boy-gang kind of a song. It was a night shoot, which is always a bit difficult, but with Akshay sir on the sets, it was great fun. He likes to joke around and keep the atmosphere light. Since the film is set in a certain period, the look of the song was already decided,” he added.

“Ganesh Acharya choreographed the song. He has a knack for coming up with dance steps that look natural,” the filmmaker further informed.

BL Verdict: The look and feel of the song is good. Akshay has time and again proved he’s good with Punjabi music. And this was no different. What stood out was the elements used in the music. Be it the iktara or the dhol, it oozed the Punjabi spirit. What did you think of the song? Tweet to @bollywood_life and let us know.