Khatron Ke Khiladi 6 has entertained us for a little over 2 months and is finally coming to an end tonight. Sana Khan’s drama, Ashish Chowdhry and Hussain Kuwajerwala’s goofy antics, Natalia Kaur’s Hindi; I thoroughly enjoyed them all. But most of all, I enjoyed the amazing stunts that left me on the edge of my seat often. Not really because they were so dangerous, but just because it was thrilling to see celebs perform the. While I’m expecting that the best is yet to come (they always save the best stunt for the finale), here’s taking a look at 5 of this season’s best stunts … Also Read - Aamir Ali-Sanjeeda Shaikh, Sumeet Vyas-Shivani Tanksale, Raqesh Bapat - Ridhi Dogra: These TV stars divorces were quiet affairs

Inspired from Dhoom 3, the stunt required Sana, Natalia and Meiyang to run along the outer wall of a tower while collecting flags on their way down. Of course they were supported by the required harness. But it was awesome to think that gravity had no affect on them! Also Read - WTF Wednesday: Kareena Kapoor Khan, Malaika Arora, Aishwarya Rai Bachchan and more Bollywood actresses who were mercilessly trolled for their age 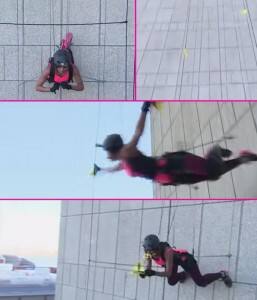 Also Read - Kaam bhi, love bhi! THESE 12 famous TV couples fell in love with each other on the sets of their show

In this one, Sagarika, Ashish and Ridhi were tied with a stretchable cable on the roof of a bus which was moving. On the route of the bus were placed flags which they had to collect and were awarded 2 points for each flag. They also had to pick up eggs from the other end of the roof without breaking them. I know it’s not really dangerous, but I just have a thing for speed so I kind of like this one. 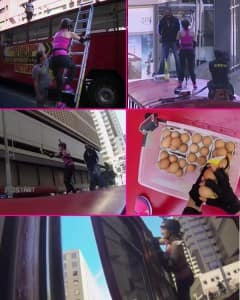 If I ever get a chance to do a stunt, this one would be it! So basically Ridhi, Ashish and Asha had to climb up a ladder hanging on one end of a metal container. Then walk over a thin yellow rod to move to the other end and up the roof. Next they get inside the container through a door on the roof. Then they sit on a marked spot, connect two cables and BAAM! They are dragged out of the container and are hanging mid-air. WOW! 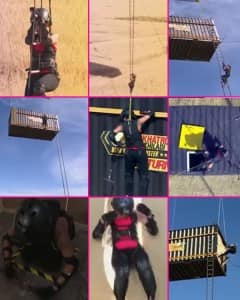 Iqbal, Meiyang and Natalia performed this water stunt which in Rohit Shetty’s words was “pretty simple.” There was a table of bolts inside the pool on one end and a basket on the other end. The contestants were tied upside down on a rope and dipped on each end of the pool for 10 seconds. All they had to do was unscrew the nuts from the bolts and put them in the basket. They had 2 minutes to perform the stunt and the one with maximum nuts would win. 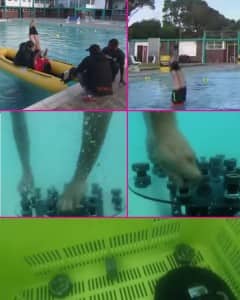 This one’s my favourite. The task was performed in pairs- Ashish Chowdhry vs Sagarika Ghatge and Hussain Kuwajerwala vs Nandish Sandhu. The two contestants were put in a giant partitioned box (one contestant in each compartment) hanging over water. A liver, in each compartment, is kept locked and can be opened with one of the three keys hanging inside. On pulling the liver, the floor of the box would open dropping the contestant in water. But it does not end here… The contestant has to walk over an underwater ramp with the support of weights placed on each side of the ramp and finally ring the bell at the end of the pool. 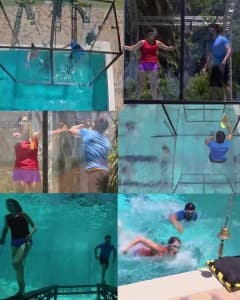 These were my favourites. Feel free top add to the list. Leave your comments below!