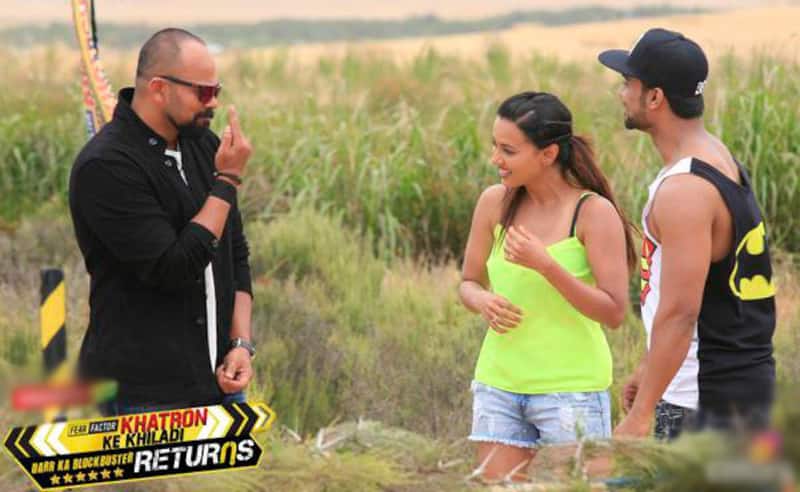 In today’s episode of Khatron Ke Khiladi 6 Meiyang Chang and Nathalia Kaur were the first ones to perform the partner task wherein they had to remove flags from the bottom of a boat suspended from a helicopter and they performed the stunt surprisingly well. Then it was Sana Khan and Salman Khan’s turn to do the task. The duo ended up wasting a lot of time as Sana refused to jump from the boat after which Salman had to push her partner to complete the stunt. Also Read - Shruti Haasan's PCOS and endometriosis, Shenaz Treasurywala's face blindness and more Bollywood actors who faced severe health issues

After the two jodis completed their task, host Rohit Shetty announced the result. While Meiyang and Nathalia completed their stunt in 1 minute 22 seconds, Sana and Salman took 1 minutes 57 seconds to do the task. Also Read - From Additi Gupta to Sriti Jha – Yeh Rishta Kya Kehlata Hai actor Harshad Chopda has been linked with THESE co-stars

The Chennai Express diretor also revealed the advantage that he has been talking about for weeks. The advantage, which was a immunity from elimination was given to Ashish Chowdhry, who hasn't been in the danger zone ever since the beginning of the show . Also Read - Swara Bhasker, Uorfi Javed, Shah Rukh Khan, Salman Khan and more celebs who received death threats

The second task called Worcester was kicked off by Nandish Sandhu and Rashami Desai. They had a hard time doing the task because of their lack of co-ordination. Hussain Kuwajerwala and Ashish were the next contestants to perform the task. The two boys nailed it in their task. Nandish and Rashami managed to collect 9 flags while Hussain and Ashish colleted 13 of them.

Sagarika & Iqbal and Rakesh & Asha Negi then geared up for the third stunt. Iqbal and Sagarika performed the task first and its called Chillar Party. They lost to the task to Rakesh and Asha.

In the next episode, all these jodis will be the first various stunts, one of which will be a elimination task. Which means the viewers will get to witness a double elimination this week.