Kim Sharma and Leander Paes look gorgeous as they attend a wedding in desi wear; fans laud them as awesome and good-looking pair 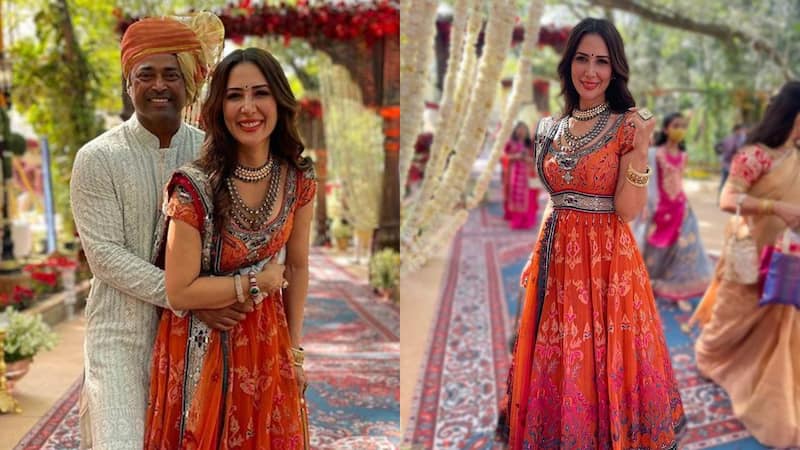 Kim Sharma and Leander Paes are not shy of PDA. The Mohabbatein actress and India's tennis ace have been dating for more than six months now. It seems they got introduced via common friends. Kim Sharma and Leander Paes attended a marriage together and she has posted pictures of the same. In the clicks, we can see her in a bright orange lehenga. The jewellery is from Satyani, which is a known brand. Kim Sharma has been back in India for close to four years now after her split with husband, Ali Punjani. She had been living in Kenya for nearly a decade. Also Read - Kajal Aggarwal to Priyanka Chopra: Celebs' latest heart melting baby moments will make you say aww-dorable

Kim Sharma and Leander Paes' dating rumors surfaced after the two were seen outside the Pilates class. Later, she posted pictures of them from Goa. She visits Goa frequently. Fans began speculating that the two were dating. After that, we started seeing more of the two on each other's Instagram. She also enjoyed a date on her birthday, which went by recently. Fans are showering love on the two. They commented on how awesome she was looking. A fan called her, 'Bachpan Ka Pyaar' while another one stated, 'Good looking pair'. Also Read - Yuvraj Singh and Hazel Keech make Father's Day special for their fans; share first pictures of their son Orion Keech Singh [View Pics]

Kim Sharma has always made news for her relationships. Her love affair with Yuvraj Singh was widely documented in the media. The actress moved to Kenya after her marriage. When she returned there were rumors of how she was left without any cash. Kim Sharma assured fans that she was doing well financially and there was no crisis. The actress dated Harshvardhan Rane for almost a year. Fans loved them. After their split, Harshvardhan Rane said that he regretted that he could not hold onto their relationship. He called Kim Sharma a lovely person. Well, we have seen how nicely Kim Sharma's family is bonding with Leander Paes. Let us see if an announcement happens soon! Also Read - Father's Day 2022: Nick Jonas, Haarsh Limbachiyaa and more celebs will celebrate this SPECIAL day for the first time with their little ones