Kis Kisko Pyaar Karoon movie review: Kapil Sharma's debut as the king of polygamy is funny but has no logic whatsoever! 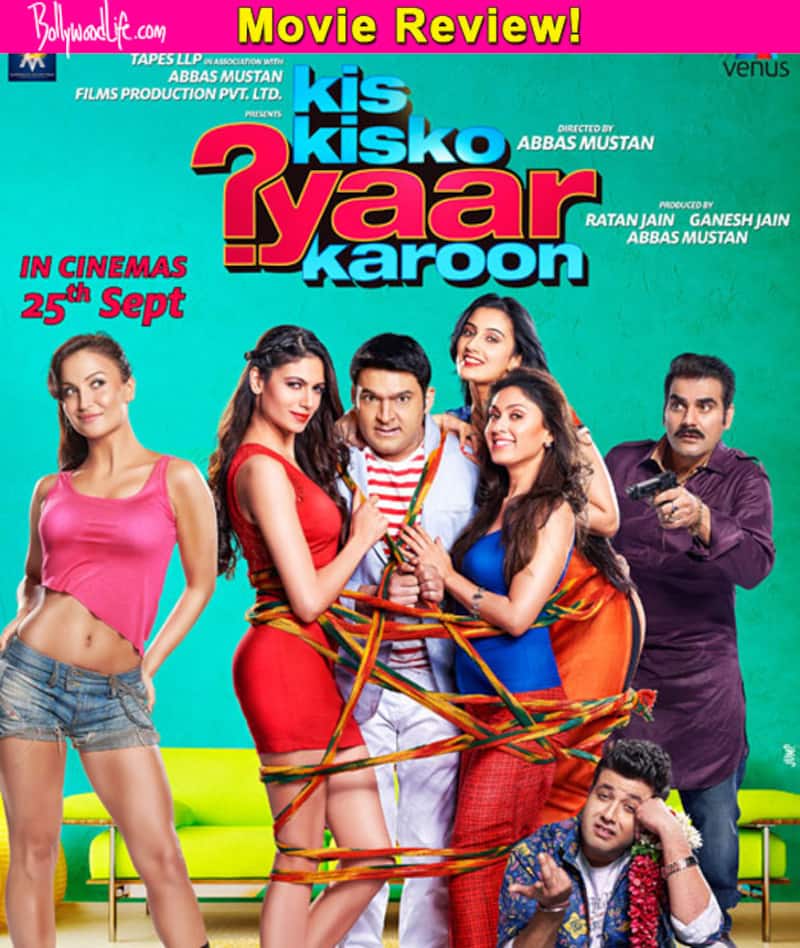 The world of small screen has given some big stars to Bollywood. In fact, king of romance, Shah Rukh Khan started his career from TV shows. While in recent times a lot of TV stars have tried their hands with films and failed, it is popular comedian Kapil Sharma's first shot at the glitzy world of films. Kapil Sharma is making his debut in films with the director duo Abbas Mustan's Kis Kisko Pyaar Karoon. With Varun Sharma, Elli Avram and Arbaaz Khan as supporting cast, will Kapil leave a lasting impression as an actor? Lets check out the review! Also Read - Arbaaz Khan's girlfriend Giorgia Andriani knows how to ace outfits effortlessly – Pilates, party or beach [View Pics]

What's it about: Also Read - Arbaaz Khan Birthday: From marriage to Malaika Arora, bond with ex-wife, relationship with Giorgia Andriani; a look at the Dabangg star's love life

Though the basic story of the film is not new to us, there is a lot happening in the film thanks to truckload of characters. I hope I don't miss anything important. Here it goes. Kumar Shiv Ram Kishan (Kapil) is a man troubled by the ill fate of three marriages. Due to some unfortunate and often illogical turn of events, our hero finds himself in situations that forces him to marry. And to help him hide his other marriages from his wives, he takes help of his lawyer friend Karan (Varun Sharma). And just when you thought that our hero has enough problems on his plate to deal with, he also has a girlfriend Deepika (Elli Avram) whom he truly loves and wants to marry. What will happen now? How can anyone possibly get out of this mess unscathed? Add a deaf don cum brother in law, estranged parents, a typical dim witted bai and an ever doubting future father in law into the equation, and you get heady mix of confusion and fun called Kis Kisko Pyaar Karoon. Also Read - Sunil Grover-Kapil Sharma, Sidharth Shukla-Rashami Desai and more TV celebs who grabbed headlines for their NASTY fights

The biggest merit of Kis Kisko Pyaar Karoon lies in the fact that it keeps you entertained. Sure, it might seem a little over the top and at times juvenile, but the film thankfully doesn't bore you, which is a huge plus point. Even though the basic plot is same as Govinda's Sajjan Chale Sasural, there are enough characters and loads of situational comedy that will help you overlook the story's lack of novelty. Kapil Sharma stands out in his debut flick, playing the part of a man who, day in day out, lives in the tension of managing three wives. His nervous comic timing and his ability to make a serious situation hilarious benefits the film hugely. While you secretly pity at Kapil's state, one just can't help but chuckle at his plight. Kapil, even, shines in the dramatic scenes and shows great promise as an actor. Varun Sharma does justice to his role of Kapil's cheeky lawyer friend, who gets him out of troubles. His jokes about science and Newton's laws infuses laughter. Even though he is playing a stereotypical role of a deaf person of Bollywood standards, Arbaaz Khan's antics and his dialogues are entertaining. Scenes like Kapil's attempts to hide from the prying eyes of Eli's father in a mall, where all his three wives are out for shopping are hilarious and outstanding. Manjari Fadnis' repetitive one liner 'Bhagwan Sabko Tumhare Jaisa Pati De' makes you enjoy the underlined pun in it.

While the comedy is good and the makers have kept the proceedings entertaining, Kis Kisko Pyaar Karoon is far from perfect. One major flaws of the film is the complete lack of logic from start to finish. How can anyone married to three women, living in the same building, manage to escape for so long without being caught? And how can these wives be so dumb that even after becoming friends with each other, they never come to know the truth about their husbands ( or rather husband)? And how does Kapil's lawyer friend Varun doesn't know that polygamy is illegal in India? The start of the film, where it is shown how Kapil gets married thrice, is so illogical and juvenile that I felt like the makers are questioning the intelligence of the audience. The climax of the film is so laughable and dumb that you can't help but feel that the makers are actually glorifying polygamy. After Kapil calls his three marriages as "hadsa" and convinces that his wives, his parents and the society that he is innocent, by delivering an utterly unconvincing speech, Eli Evram says this," Jis aadmi ne hadso se pyaar kiya, us aadmi ke pyaar ko me ek hadsa nahi hone doongi." And I stood up and gave a standing ovation to this dialogue which sums up the level of idiotic-ness of this climax. And, oh please don't get me started about Elli Avram's acting.

If you are looking for having a few laughs at the cinemas this week, and have the stomach to digest a dumb comedy, then Kis Kisko Pyaar Karoon is for you! Watch it for Kapil Sharma's impressive debut!