LEAKED! These pictures of Rajinikanth and Amy Jackson from 2.0 are going viral - view pics

Rajinikanth, Akshay Kumar and Amy Jackson's 2.O is one of the most awaited films and though the film has been pushed to next year, the craze surrounding the movie is sky high! While the makers officially launched the first looks of Akshay Kumar and Rajinikanth during a grand poster launch event in Mumbai, Amy's look was hidden. However, in a shocking turn of events, two pictures from the film were leaked a few days ago and they have gone viral. And one of those images actually show us Amy's first look from the film. Also Read - Vin Diesel's Fast and Furious 9 to take on Akshay Kumar's Bell Bottom at the Indian box office, setting up a MEGA Hollywood vs Bollywood clash at the box office

From the leaked stills, we come to know that Amy is also going to play a robot in the film. If she plays Rajinikanth's love interest or not is something we will have to wait and see. But we can confirm that she will be seen doing a lot of insane action sequences in the movie. In the picture, we see her driving a bus or a truck during a particular scene for 2.O. The other leaked still from the film shows Rajinikanth trying to push or lift a huge object or machine. He is in his Chitti avatar and looks pretty intense. Check out both the pictures right here and tell us what you think about them in the comments section below! (ALSO READ - Rajinikanth's 2.0 already BEAT Prabhas' Baahubali 2 - here's how) Also Read - AWKWARD: From Akshay Kumar to Shilpa Shetty Kundra: 7 of the weirdest photoshoots of Bollywood celebs that will give you a hearty laugh 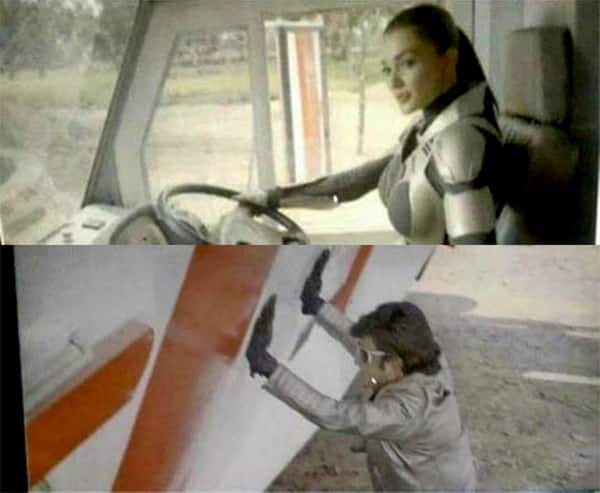 Directed by Shankar, 2.O was initially going to release during Diwali this year. But with a lot of pending VFx work, the makers decided to shift the release and it will now release on January 26 (Republic day) next year. The film is touted to be the costliest film ever, made on a budget of Rs 450 crore. With the film being released in more than 7000 screens in India, 2.O might challenge the records set by Prabhas and Rana Daggaubti's Baahubali 2: The Conclusion. But if they will be able to break them or not is something that remains to be seen! Anyway, stay tuned to BollywoodLife as we get you all the latest updates about the movie right here...