Boxing legend Mike Tyson, who is all set to make his acting debut with Vijay Deverakonda's upcoming pan-India film Liger, was spotted on a wheelchair at Miami airport days after he talked about his expiration date is coming close. His unusual appearance has now raised more concerns about his health condition. 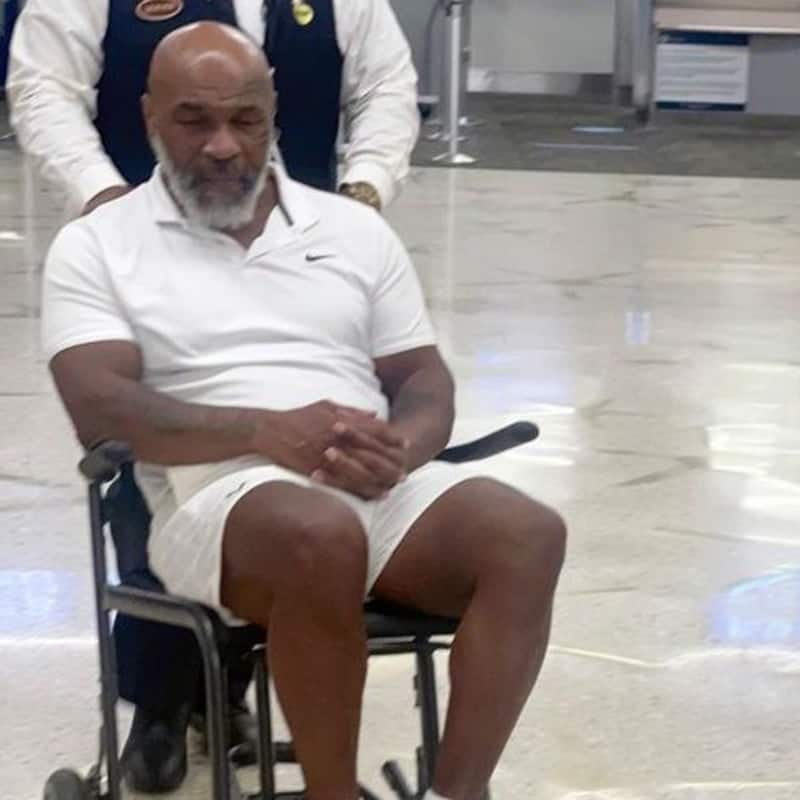 Boxing legend Mike Tyson, who is all set to make his acting debut with Vijay Deverakonda's upcoming pan-India film Liger, was spotted on a wheelchair at Miami airport days after he talked about his expiration date is coming close. His unusual appearance has now raised more concerns about his health condition.

According to reports, the 56-year-old was wheeled through the terminal at Miami International Airport. He was dressed in white shorts and matching shirt and shoes and was seen posing for selfies with fans. But he didn't seem to be in his best condition.

He used a walking stick with him and a white towel to wipe his mouth. He was also seen carrying the same walking stick in New York. However, a source close to Mike dismissed people's concerns and told TMZ that it was "nothing serious".

The former heavyweight champion is reportedly "dealing with a sciatica flare-up" in his back, which was described as some old "wear and tear" from living his life and an "occupational hazard for an athlete like Mike." What caused more worry, however, Mike was talking about coming to grips with death in the same month during a conversation with his friend and therapist Sean McFarland.

"We're all gonna die one day of course. Then, when I look in the mirror, I see those little spots on my face, I say, 'Wow. That means my expiration date is coming close, really soon'. I just want to die consciously. I don't want to die screaming. And I've heard the last rights of a lot of people - a lot of famous people - and they're getting ready to die, and they leave this planet screaming," Mike had said during his Hotboxin' With Mike Tyson podcast.

During the conversation, Mike also said that money isn't important to him and it doesn't bring the happiness and security that some people expect it to. "Money don't mean s*** to me. I always tell people - they think money's gonna make them happy, they've never had money before - when you have a lot of money, you can't expect nobody to love you. How am I gonna confess my love to you when you have $500 billion?"

"What is security? I don't know. When you put money in your bank and you get a cheque every week and you can live for the rest of your life, is that security? That means you won't catch a disease, you can't get hit by a car? You can't jump off a bridge. I don't know. Is that security? Can money secure you from that?" he had questioned.