Listen up fans, Kaisi Yeh Yaariyan’s Parth Samthaan has an important message for you!

The actor is currently hospitalised and took time out to share an important statement on his Twitter account. Read on to know what it’s all about!

Kaisi Yeh Yaariyan’s Parth Samthaan is sadly, not keeping well. The actor was recently hospitalized, following a viral fever which turned severe when he continued to shoot despite being ill. The actor however took time out to share an important message with his fans. There was a time when it was being speculated that Parth may quit KY2. Reports suggested that the actor had decided to call it quits following a rumoured tiff with co-star Niti Taylor. The actor however denied this news, calling it 'baseless' and stating that he will very much be a part of the series. Also Read - Kasautii Zindagii Kay 2 reunion: Parth Samthaan, Hina Khan, Erica Fernandes and others party hard – see pics

Though Parth has received tremendous love from his fans, there are others who continue to hurl abuses at him and bashing him. Many continue to spread rumours regarding him and the producer of the show, Vikas Gupta, suggesting that the two have a had a bitter fallout of sorts. Also Read - Shabir Ahluwalia, Hina Khan, Gashmeer Mahajani and more - TV celebs whose exit from shows made a lot of noise

Well Parth has had enough of this and decided to clear the air. Check out this statement that the actor put forth on his Twitter account: Also Read - Parth Samthaan birthday special: From Disha Patani to Erica Fernandes, Kehne Ko Humsafar Hain 2 star and his most-talked about love affairs 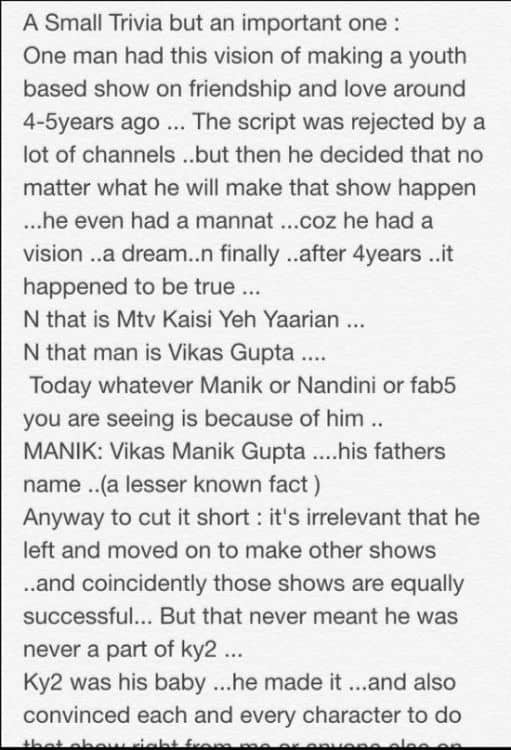 So for all those bashing and continuing to spread unnecessary rumours, it’s time for you to stop! Parth has had enough and has clearly stated that he admires and is extremely close to Vikas.