Justin Beiber's guitar goes out of tune. The singer apologises to the crowd and tells them it is happening due to humidity. He feels he is privileged to be here in India. Also Read - Sachin Tendulkar's son may look a lot like Justin Bieber but he's not particularly a Belieber

Beliebers in India are the happiest today; well, at least the ones attending their icon's concert in Mumbai are. International pop star Justin Bieber has landed in Mumbai for a concert as part of his Purpose tour. Social media platforms had been flooding with posts about the concert since past few weeks, and today is the day. The concert is being held in DY Patil Stadium, Navi Mumbai, with around 45,000 fans expected to attend. Parking provision for 25,000 vehicles has been made, and that is just the tip of the iceberg of arrangements put in place for the event. Also Read - What's next for Justin Bieber after the Purpose tour India concert?

Thanks to social media platforms, fans sitting at home are getting each and every single update about the concert. Jacqueline Fernandez, who will host Justin for the day, gave us a sneak peek of the chopper ride that has been arranged for her to reach the stadium. So far, we can only confirm that Jacqueline will be there at the concert. But as the day progresses we expect to see more of our B-Town buddies to turn up at the event. Also Read - Right before Justin Bieber took centrestage for the concert, fans were CHANTING Alia Bhatt's name

Here is everything that is happening at Justin Bieber's concert, LIVE :

# Here is a video of Justin Bieber arriving at the Mumbai airport, last night.

#A video captured by Waluscha D'Sousa's daughter Chanel is going viral right now. It shows Justin on streets of Mumbai in his SUV, on his way to the concert venue. The pop stars waves back at Chanel in the video, which is so damn sweet. Watch the video here:

A few lucky fans spotted #justinbieber on the streets of Mumbai

#The crowd is only beginning to gather at the event. Here is a look: 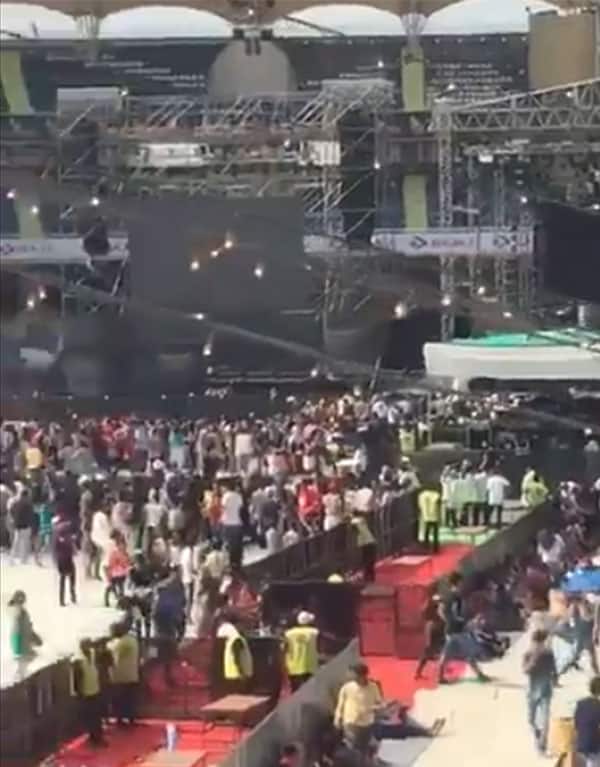 # In the meantime, enjoy this picture of Justin chilling at Inorbit Mall, Vashi before his concert:

# BTW, water bottles are being sold at a shocking price of Rs 200 per bottle at the venue. Our correspondent Aastha Nandrajog is at the concert. And she is giving us all the inside deets. Here she is talking to a few fans at the venue:

Here is a picture of Remo D'Souza at the concert 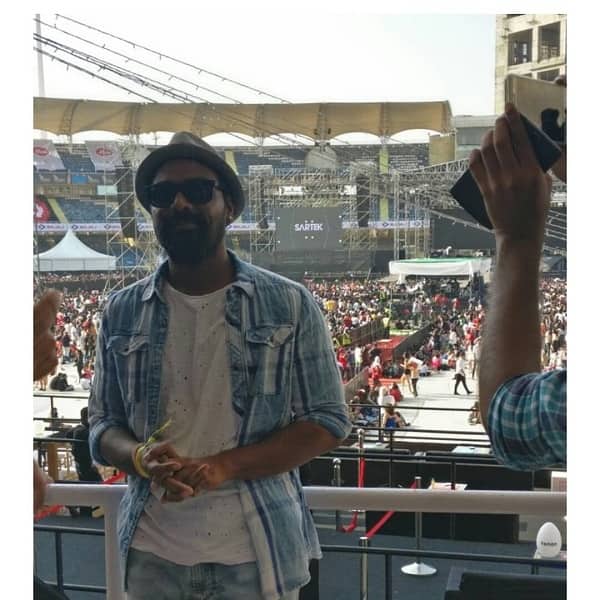 # We just got to know through our source that Justin will be reaching the concert venue via the road. Read: We know what Justin Bieber ordered at this Starbucks right before his Purpose Tour concert – view EXCLUSIVE pics

# Khushi Kapoor is attending the concert: 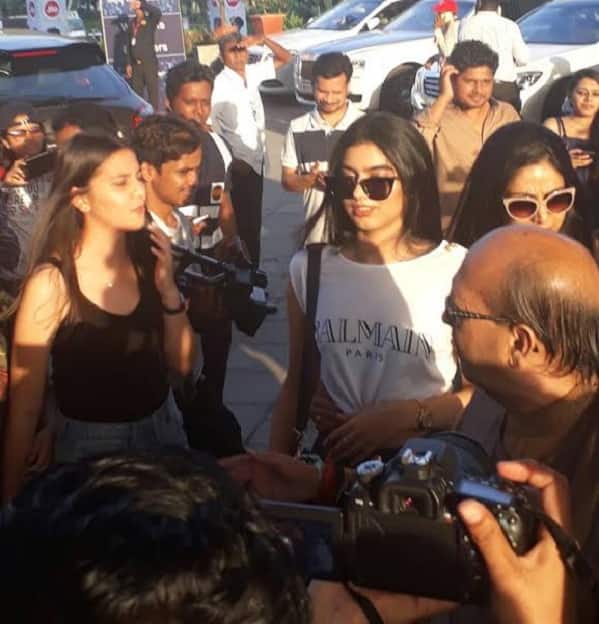 # BTW, we know what Justin Bieber ordered at Starbucks. Stay tuned for the menu. Coming up!

#Meanwhile Alia Bhatt has reached the venue with Ayan Mukherji 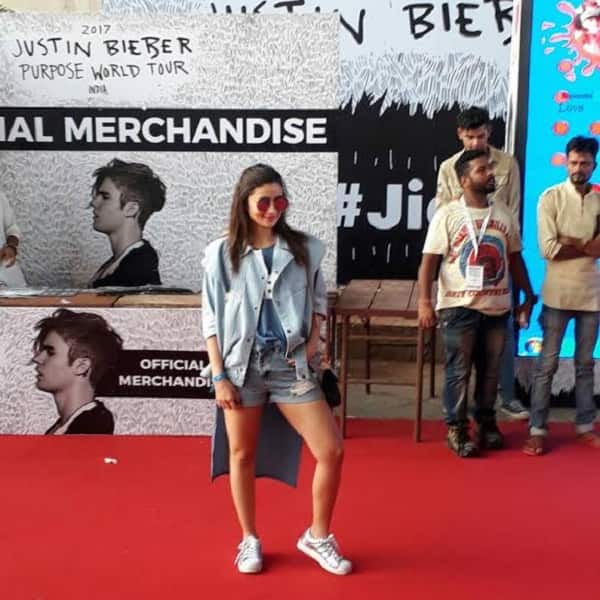 # While Justin takes his own sweet time to reach the venue, DJs Sartek, Zaeden and Alan Walker are keeping the fans entertained with their acts. Alan Walker is performing right now (7:04 PM).

At 7.25 pm DCP Nitin Pawar announced that they will stop the concert at 10 pm sharp. It will not go on a minute longer.

# Raveena Tandon arrives at the venue with these angels

Malaika Arora and Arbaaz Khan arrive at the concert with their kids. Hos sweet!

Justin will take the center stage at 8:00 pm.

# He begins his set with Mark My Words

# Justin sings "Where Are Ü Now" next.

# Then it is turn for I'll Show You. Justin is singing this lovely number!

# Next up is the crowd pleaser - Boyfriend. The Candian pop star just performed the number.

# Justin Bieber gets a guitar on stage

# His guitar goes out of tune.

# Justin: I am privileged to be here. Tonight is going to be the best night of your life. You guys are the coolest people I have met. Weather is not too hot but the sun is kinda different here.

#Justin: What a beautiful night tonight, this is the best part of the night. Starts singing give each other company.

#Sings it's not easy to love me

(10) Another video of Justin Bieber onstage performing at the #PurposeTour in Mumbai, India. (May 10) pic.twitter.com/dXzFm3ANSY

Justin makes the crowd chant India and then Mumbai.He points to the moon and asks if it is a full moon day or not. Now he is wearing a pink scarf around his neck. People light the torch and wave it around while he sings life is now worth it or something like that. He then removes the scarf and throws it into the crowd. He shows off his abs as he emerges out of the stage and starts singing 'What do you mean'.

#Justin: I want to ask who wants to be my baby and starts singing baby. He sings 'Children' and 5-6 Indian Kids join him on the stage , dance with him and he talks to each and every kid.

#Justin: Tonight has been one of the best lives of my life. I really love you guys, it's a privilege to be here and I'll surely be back here again. This is the purpose tour, so let's take two minutes and think about the purpose of the life. I've named it purpose tour for a reason and I think the best is yet to come.

#He points out to people in the crowd and says 'I love You' and makes 'heart shape' with his hands. Does Namaste and walks off the stage.

#The show was over but everyone started screaming 'Sorry,Sorry', so he came up and sang 'Sorry'. One guy from his crew waves the Indian National Flag.

(15) Another video of Justin Bieber onstage performing at the #PurposeTour in Mumbai, India. (May 10) pic.twitter.com/X5Lu7M9vOW

Stay tuned to this space for more updates from the Purpose Tour concert.