Lok Sabha Elections 2019: Allu Arjun, Chiranjeevi, Ram Charan cast votes in Hyderabad and urge their fans to do the same

Today is the first day of the first phase of 2019 Lok Sabha elections and we are seeing maximum people from Hyderabad coming out to cast their vote. And among them, we saw the stylish stars of Tollywood like Allu Arjun, Chiranjeevi, Ram Charan, Pawan Kalyan, Jr NTR, SS Rajamouli and many more, who posed for the camera after casting theirs. Just a few hours back, Allu Arjun posted a note and urged his fan to vote this year. He captioned the post, "Today is that 1 day which will decide how the next 1825 days should be. Pls cast your vote." Well, we hope after watching their favourite stars in this gesture, many fans will come out and cast their vote like a responsible citizen. Also Read - Dance Plus 5 November 9, 2019, Written Updates: International contestant and epic dance makes the launch episode a winner 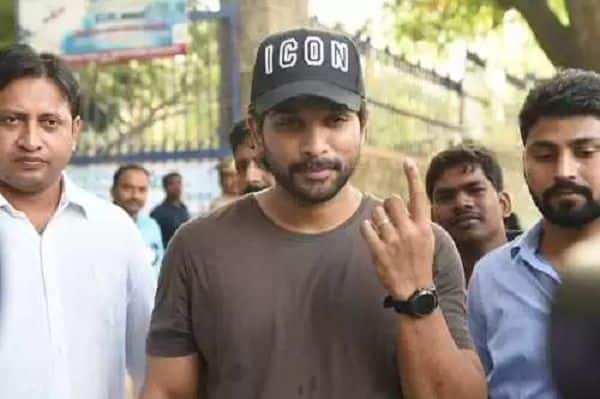 Also Read - Rs 1,535 crore and counting! That's the MIND-BOGGLING amount riding on B-Town in the second half of 2019

Today is that 1 day which will decide how the next 1825 days should be. Pls cast your vote.

Talking about Allu Arjun, the actor had announced 3 films on the occasion of his birthday. Arjun will do a film each with directors Trivikram, Sukumar and Venu Sriram. Arjun's film with Trivikram will go on the floors later this month. It will mark his third outing with the filmmaker after Julayi and Son of Sathyamurty. The makers of the film on Monday unveiled a special poster to announce their project with Arjun. Also Read - Guddan Tumse Na Ho Payega 23 May 2019 written update of full episode: Guddan and Akshat find a clue about the person who tried to kill Durga

Arjun is teaming up with Sukumar for the third time in this yet-untitled project, currently dubbed as AA 20. Rashmika Mandanna has been finalised as the film's leading lady. Mythri Movie Makers will bankroll Sukumar's film. If everything goes as planned, the project will go on the floors in the second half of the year.

Arjun's third film with director Venu Sriram is titled "Icon". The makers released a special poster to commemorate the announcement. The stylish star was last seen in Naa Peru Surya, which performed below expectations at the ticket windows. It was directed by Vakkantham Vamsi and produced by Shirisha and Sridhar Lagadapati under the banner Ramalakshmi Cine Creations.

Half of my unit members left to their towns and villages to exercise their vote... Good... Do Vote... If you think no party/candidate makes a difference, make use of nota.. #VoteForIndia

We got inked! Did you? #GoandVote

Talking about Ram Charan and Jr NTR, both the actors are shooting for SS Rajamouli's RRR, which is scheduled to hit the screens on July 30, 2020.