However, if you are not a sucker for romance, you can avoid Love Per Square Foot. 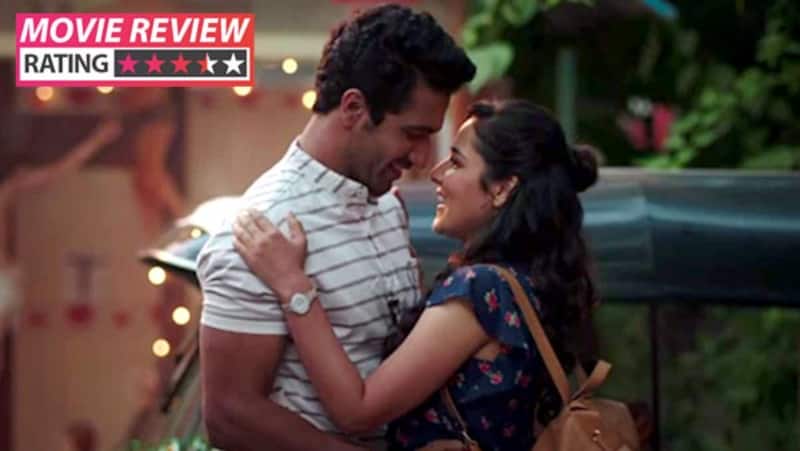 It doesn't matter that Kajol took the extra effort to run to the exact train compartment in which Shah Rukh Khan was, instead of getting on any other compartments which were relatively closer, because they were in love. By now we all know that love and logic don't go hand-in-hand but that doesn't mean that we don't want them to. Everyone loves a good love story that will also make sense. In the Netflix original, Love Per Square Foot, that released today, the lead pair plans to enter a marriage of convenience for the possession of their dream home. But does director Anand Tiwari manage to create a narrative where we won't question the absurdity of the plot that drives the film? Find out in our review... Also Read - Aamir Khan's Laal Singh Chaddha beats Shah Rukh Khan's Zero, becomes the biggest disaster starring a Khan

What's it about Also Read - Kajol makes shocking revelations about her relationship with Ajay Devgn; speaks about two painful miscarriages and more

Sanjay Chaturvedi (Vicky Kaushal) and Karina D’Souza (Angira Dhar) share the same dream of owning a house of their own in the bustling city of Mumbai. Not destiny but a housing loan brings them together. To procure a house out of a lottery, they have to apply for a joint loan as a married couple. They are not in love, let alone being married but but they do need the house. So, as Angira puts it in one of the dialogues in the movie - everything happens to them in the reverse. They get a house first, then get married, and then fall in love. So basically, the quirky slice-of-life comedy is all about a house-hunt.

Anand Tiwari and Sumeet Vyas get a 9/10 for writing this comedy. Except a few hiccups, their story holds together very well. Anand, who is also the director of the film, is bang on with his portrayal of the spirit of Mumbai and even manages to get the nuances of the middle-class family just right. One of the best montages of the city I have ever seen, serves as the opening credits for the film, while a kickass rap plays in the background.

If I ask you as to what is your favourite Imtiaz Ali film, chances are you would pick anything from a Highway to a Jab We Met to a Rockstar. Well, all good choices. But if you find his first film Socha Na Tha to be his most underrated project, you will enjoy watching Love Per Square Foot. It might not have the masala entertainment quotient that we expect of a Bollywood romance, but it is overloaded with cuteness. Watching it is like falling in love all over again and I bet you will feel the butterflies flutter in your stomach.

While Love Per Square Foot is every hopeless romantic's dream come true, it will also manage to resonate with everyone who harbours a desire to own a house in the city someday. The opening shot of the movie is that of our hero standing on the top of a roof with a towel around his neck like a cape - his shadow perfectly depicting him as a superhero. Well, every Mumbaikar is a superhero, to say the least. It takes a certain amount of superhuman strength to get out of the bed every day and commute to work in the locals that are packed to the brim. With just a handful of scenes, the film establishes this fact. The hero also stares dreamily at the life of another couple, whose flat is visible from his roof, suggesting how here everyone is pining for and chasing the same dream. His father delivers the most endearing speech as he retires from the position of a railway announcer at the Bandra station and emphasises the value of being on the right platform at the right time - commentary on the plot of the film and a metaphor as a life lesson.

There are plenty of comedy scenes in the film. From Angira thinking that the word 'karmchaari' is an abuse hurled at her by Vicky while he only called her an employee in Hindi, is hilarious. The communication between the Hindu family of the actor and Christian family of the actress makes fodder for some really good jokes. The comedy in Love Per Square Foot comes from honest situations, which makes it much more relatable. Like Raghuveer Yadav calls his future daughter-in-law Karishma instead of Kareena. Our parents tend to do that, right?

The actors, Angira and Vicky, have done a fabulous job. Their adorable chemistry holds the film together. In fact, Love Per Square Foot boasts of a plethora of great actors, including Supriya Pathak Kapur and Ratna Pathak Shah after a very long time.

A funny cameo by Ranbir Kapoor makes for the best climax.

A few things stick out like a sore thumb in the film. Sanjay's boss, Rashi, is as unreal as they get. While the cast has done great with what they have been provided with, the lead pair doesn't get any great scene in the film. There is nothing for them to sink their teeth into. And we don't get an edge-of-the-seat climax that, honestly, this story deserved.

Then there is the unnecessary bundle of songs packed in the narrative. The movie could have very easily done without songs, which almost hamper its pace.

If you are a love bug, Love Per Square Foot will certainly tug at your heartstrings and make you feel giddy. It is the perfect romantic film that we were waiting for. It is the cutest film that has released in the longest time. However, if you are not a sucker for romance, you might want to avoid it.