The film will take you through various emotions of discomfort, angst, outrage, cringe, satisfaction to plain meh... 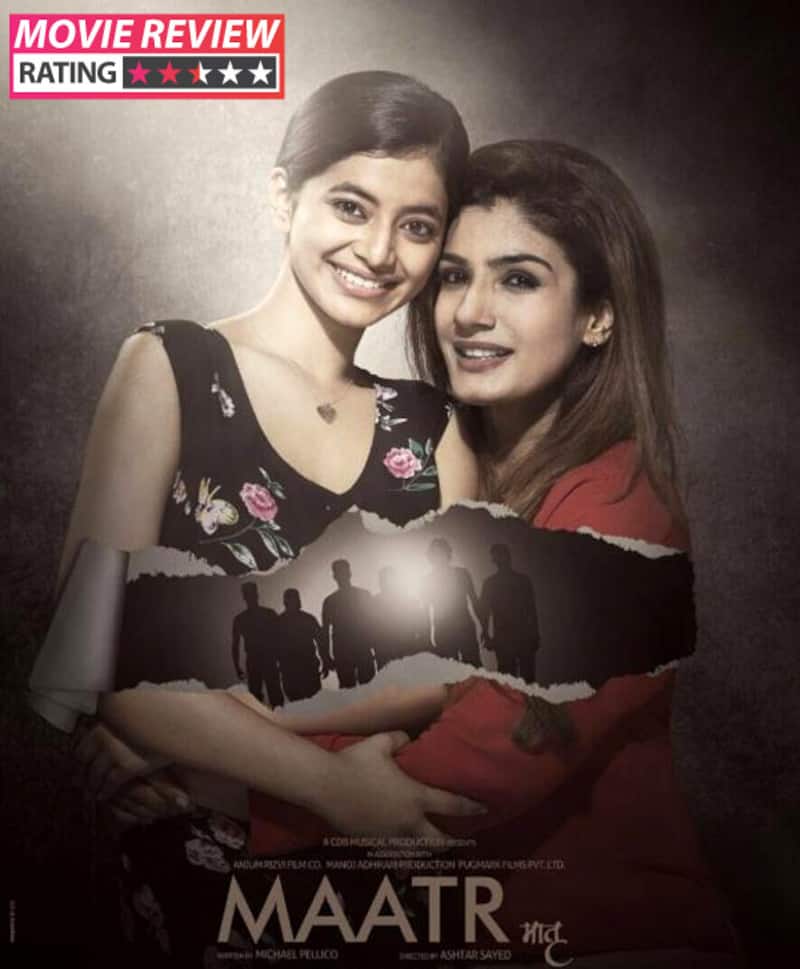 Maatr which means Mother in English is a rape-revenge thriller that deals with the issue of increasing number of rapes in India. Film marks the return of one of the top stars of 90s, Raveena Tandon, who was last seen in a cameo appearance in Bombay Velvet. It is directed by Ashtar Sayed and also stars Madhur Mittal, Divya Jagdale, Shailender Goyal, Anurag Arora, Saheem Khan and Rushad Rana among others. Also Read - Nach Baliye 10: Salman Khan produced reality show gets POSTPONED again? Here's when the show will go on air

Vidya's (Raveena Tandon) life turns upside down when she and her daughter, Tia (Alisha Khan) are abducted and gang-raped by Chief Minister's son Apurva Malik (Madhur Mittal), his uncle and five of his friends. After the death of her daughter, being abandoned by her husband and being subjected to an unfair treatment by law, she decides to take things in her own hands and walks down the path of vengeance. Whether she succeeds or not...forms the remaining plot of the film. Also Read - Before Sushmita Sen found a partner in Lalit Modi, Shilpa Shetty, Juhi Chawla and other actresses fell in love with business tycoons

The first ten minutes of the film are the most unsettling experience I've ever had while watching a film in a long time. Having said that, the film scores most in the performance section. Each and every cast member gives a riveting performance. Raveena Tandon who is seen as a main lead on the big screen after 11 years nails her part of a grieving, vulnerable, broken mother. She has done quite a few hard hitting roles in the past in films like Daman (for which she won National Award), Satta etc and this performance goes right up there. Without giving much away, there is a scene in the film where her character says, "It's okay...it's okay" to an agitated teenage girl who has just witnessed a murder, disguised as death. In that particular moment albeit a brief one, she portrays anger, sympathy, happiness and menace, all at once.

A film works well when, in order to counter a strong hero, you have an equally strong, if not better, villain. Madhur Mittal as loathing Apurva Malik, makes sure you have nothing but sheer hatred for his character from the first scene till the very last. Madhur has acted in quite a few Hollywood films like Slumdog Millionaire and Million Dollar Arm and his menacing turn as rapist cum murderer is sure to get his character the brickbats and his performance the bouquets. I was bowled over by his performance. He is, in fact, the major reason you are engrossed in the film, if at all. Shoutout to the actors who played his friends and creepy uncle.

Talking about the revenge part of the film. Who doesn't love a revenge thriller! and here most of the murders she plans are engaging. What I liked most about her revenge driven avatar was the fact that she didn't overnight turn into a butt-kicker, even during the act of vigilantism, she was still a grieving mother and her fist fights were not well choreographed but rather messy which gave the film the realistic feel. The cinematography too helps the film get a realistic feel. Also read: Raveena Tandon takes a SLY DIG at Salman Khan and Aamir Khan for working with younger actresses - watch video

While the film scores well in acting department, it falters mainly in its execution and choppy editing. My first concern was the way Vidya's husband (Rushad Rana) reacts when he is told that his wife and daughter are missing and subsequently when he is told his daughter is dead. I don't know if it was intended by the director or not, the whole initial sequence involving her husband sort of trivializes the issue. I felt the character of her husband was shoddily written. That slackens the narrative whenever he appears on screen. Good thing is his scenes are few.

There is only one song in the film, that occurs twice and it was so not required. If at all it acts a roadblock. Also while I liked the way the initial murders are planned by Raveena's character, the logic and common sense goes for a toss as she progresses her way towards the main boss. Even though you feel the angst while she finally avenges her daughter, the climax is underplayed and looks straight outta 80s movie. The film tends to get melodramatic at times but is saved by the performances.

Talking about choppy editing, there are few scenes where a dialogue can be heard but you can clearly see no lip movement by the actors involved.

At various junctures the transition from one scene to another was not smooth.

Also, I want to know if Vidya's friend Ritu lives or not? If only the film was directed by an experienced director. Also read: Raveena Tandon sides with Akshay Kumar on National Film Award win, says People who don't win create controversy - watch video

The film has its fair share of snags but what keeps the momentum going is the fact that you feel content whenever Raveena's character succeeds in her mission. The film will take you through various emotions of discomfort, angst, outrage, cringe, satisfaction to plain meh. Despite its flaws and an uneven plot, watch the film for its compelling, hard-hitting performances and the fact that it creates a world where justice is served someway or the other.