Madhuri Dixit: On me who has put this green colour? 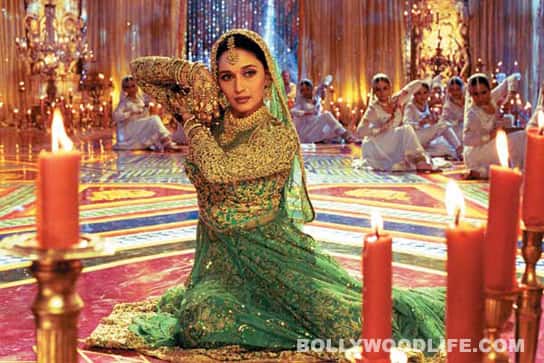 Madhuri’s back in India to judge another season of Jhalak Dikhhla Jaa. We revisit her most popular songs in the language of the country she resided in for the past ten years – America

Madhuri Dixit was one of the top heroines of Bollywood when she married US-based doctor Sriram Nene and immigrated abroad. Mads has often said that her husband had no idea of her popularity or her films when he married her and it took a while for her to make him watch her work. He fell in love with Madhuri the person, and not Madhuri the actor. While that just makes us go all mushy, we thought: why not make it easier for Mads to explain to her husband what Bollywood is all about. Now that he too has returned to India, he should be more clued in, right? We are sure Jhalak Dikhhla Jaa 5, like its previous season, will pay some kind of tribute to Madhuri. We’ve brought a few of her famous songs translated in English – a perfect combo of the two countries she calls home. Also Read - 29 Years of SRK: From being married before entering Bollywood to attaining stardom with negative roles – here's how Shah Rukh Khan defeated the ODDS to become the world's biggest superstar

With heart has heart met, from me why so shyness?

You are my lover, how you look, great just great,

Sister, your brother-in-law is crazy

Business this of his is an old one

These are whose footsteps, this is whose shadow?

Happened in my heart knock, who has come here?

On me who has put this green colour?

Hey, on me who has put this green colour?

This happiness of mine has killed me, oh killed me

Killed me, yes, killed me.

An eighteen-year-old unmarried flower was there

In a veil hiding her face (she) was walking

Fair girl was trapped in the field of gram

Happened robbery in the field of gram

First the rascal caught her wrist

Then quietly he pressed the finger

Fighting in field of gram

Happened robbery in field of gram.

ALSO READ: Ram Gopal Varma says: It is Necessary to be Scared

Shahrukh Khan said: One day she will say… leave the world!