Malaika Arora gets trolled for copying Kim Kardashian with her plunging gown at recent event; fans notice her innerwear Malaika Arora was seen today for the Miss India event. The diva wore a gold gown that was sheer. The plunging neckline showed off her assets while her black underwear was also visible through the see-through gown. The gown had a long trail and a few people were needed to hold it before she stepped on the red carpet. This is Malaika Arora's first event after her return from Paris, France. Netizens noticed that she did not walk in her usual manner. As we know, her style of walking is trolled daily on social media. Take a look at the video... Also Read - Aamir Khan-Karan Johar, Priyanka Chopra-Kareena Kapoor Khan and more: 5 times Bollywood stars ROASTED other celebs publicly

Just as the pics came out, some netizens said that people should refrain from making nasty comments. They said that people are cool if Hollywood celebs wear the same. Others said that she just loves to copy the Kardashians and Jenners too much. If this was not all, someone said that she should have worn underwear that matched the golden hue of the gown. Here are the comments... Also Read - Laal Singh Chaddha: Ira Khan promotes dad Aamir Khan's film in the most romantic way with boyfriend Nupur Shikhare [View Post] 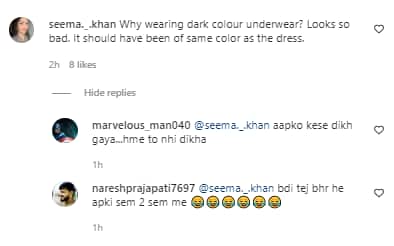 Malaika Arora is often the subject of nasty trolls. The actress gave it back saying that they did not affect her one bit. She said that Indians did not have any issues liking women like Jennifer Lopez, Kim Kardashian or Rihanna in bold outfits. However, there was a complete double standard when it came to desi women, and it was quite evident in social media. Malaika Arora is known for her extensive workout which includes yoga, Pilates and boot camp training.