Malaika Arora has tagged Arjun Kapoor as the right lover and it is adorable. The couple are now holidaying in New York where they went to celebrate Arjun's birthday

Malaika Arora and Arjun Kapoor are living it up in New York. They went there to celebrate Arjun Kapoor's birthday and also bond with some family members. From visiting the famous spots of New York to indulging in good food, Malaika and Arjun are having a whale of a time. Malaika Arora in her Insta stories has put up a post on right lovers. She has said that the right lover is the one who never causes any anxiety. Malaika Arora said the right man ended all the wars in the chest and filled one's bones like nectar. She tagged Arjun Kapoor in the past. On the occasion of his birthday, she made it Insta-official by sharing a loved-up picture of the two. Arjun Kapoor also said that she had his heart. Well, this couple is making our hearts beam and how!

Also Read - Ek Villain 2, The Ladykiller, Kuttey star Arjun Kapoor on how reinventing himself on screen has paid off 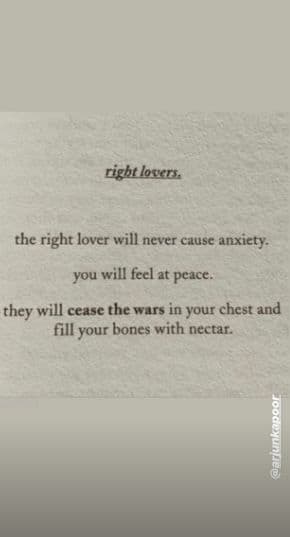 Arjun Kapoor and Malaika Arora first made it official when they posed together at the screening og India's Most Wanted. "We've come out because we feel the media has given us dignity. There's a certain understanding the media has... they've been respectful, kind, honest and decent about it. That is why I felt comfortable. You recoil when there's a certain "gandhagi" that comes with the territory. When purposely people irk you by saying, writing or asking things... there hasn't been any of that. Where the paps are concerned, we give them photos when walking in and out of a place. It is normal. We talk to them," he said. Also Read - Best Dressed Celebs of the Week: Deepika Padukone, Ananya Panday, Shehnaaz Gill and other divas who dressed to impress [VIEW PICS]

In New York, the couple enjoyed some yummy food at Cote's. It is New York's first Korean steakhouse and a delight for every non-vegetarian. In some of the pics, we also saw Maheep Kapoor and son Jahaan. Talking about the age difference between the two, she told Hindustan Times, "The age difference doesn’t really pop up when you are in a relationship. It is about two minds and hearts connecting. Unfortunately, we live in a society that refuses to progress with time. An older man romancing a younger girl is hailed everywhere, but when the woman is older, she’s called desperate’ and a buddhi’. For people who think like this, I have just one line: Take a flying f***. " Malaika is nine years older to Arjun and has a 16-year-old son, Arhaan. Stay tuned to BL for more scoops and updates!