Malaika Arora takes a dig at beau Arjun Kapoor and its hilarious to another level!

Arjun Kapoor and Malaika Arora make for one of the most adorable couples in B-town. Their virtual PDA is just too cute to handle. Recently, Arjun uploaded a picture of himself on his social handle with a funny caption and Malaika couldn't stop herself from commenting on the picture...

Day by Day, Malaika Arora and Arjun Kapoor's PDA is growing and it's amusing both of them interacting in the virtual world. Ever since the two made it official everywhere, there's been no stopping to them and we admit, we love them as a couple. Not only us there are may who are shipping 'Mallar' (their couple name, cute no?). Well, talking about their interactions on the social network, from being each others' muse and commenting hearts and love emoticons, they have now taken it to another level by taking a dig at each other. Also Read - Arjun Kapoor REVEALS what kind of equation he shared with Janhvi Kapoor before and after Sridevi's death

It so happened that Arjun Kapoor uploaded a picture of himself on his Instagram handle with a joke in the caption. In the picture, we can see Arjun gazing in the mirror. He captioned the image as, "Mirror Mirror (not) on the wall." Have a look at Arjun's picture here: Also Read - Malaika Arora leaves us ABSOLUTELY awestruck as she redefines smokin' hot in her latest photoshoot — view pics

Not just a fashionista, but Malaika Arora is a force to reckon with

Among many, Malaika was the quickest to respond. Taking a dig at Arjun she wrote, "Waah Kya Humour" Have a look at Malaika's comment here: 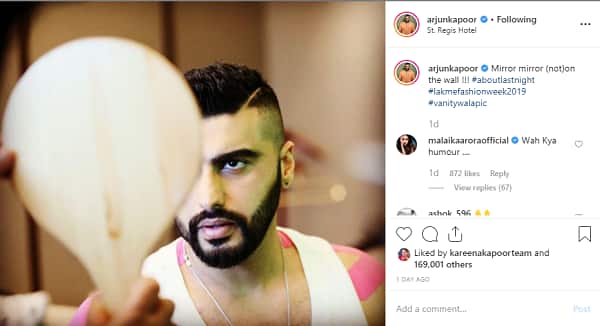 Meanwhile, rumour mills were abuzz that Arjun and Malaika would tie the knot soon. But looks like there's still some time for that. On the work front, Arjun Kapoor will be next seen in Panipat. Based on the Third Battle of Panipat, it is one of the most epic battles that took place in 1761. Arjun is playing the role of Sadashivrao Bhau in the film who served as the Sardar Senapati (Commander-in-Chief) of the Maratha army. Apart from Arjun, the film also stars Sanjay Dutt, Zeenat Aman and Kriti Sanon in key roles. Panipat is helmed by Ashutosh Gowariker and is scheduled to release on December 6. Stay tuned to BL for more updates and scoops!