Malaika Arora's verdict is out! The actress feels Arjun Kapoor's India's Most Wanted teaser is 'awesome'

The teaser of Arjun Kapoor starrer India's Most Wanted is finally out. It gives us a glimpse of a nameless man who rocked several cities across India with 52 bomb blasts, which claimed the lives of about 433 people. Arjun Kapoor, plays the role of an intelligence officer, Prabhat. He volunteers to catch the terrorist, who in the video, is referred to as India's Osama. The one-minute 30-second video is intriguing and has left us wanting for more. Arjun Kapoor as Prabhat seems promising and we feel, the actor will hit bullseye with Raj Kumar Gupta's directorial. Also Read - Shah Rukh Khan, Hrithik Roshan, Ranbir Kapoor and more – here's how Bollywood celebs spent their first paycheques

The Kapoor lad as Prabhat is receiving love from everyone, Arjun's industry friends and colleagues have flooded his Instagram comments section with positive messages. And the one who matters the most to Arjun, has given her verdict too. Yes, we are talking about his rumoured girlfriend, Malaika Arora. The actress has approved of India's Most Wanted teaser and feels it is awesome. Also Read - ‘Ek Villain 2 is not a brainless film’, Arjun Kapoor REVEALS all that we can expect from the John Abraham, Disha Patani, Tara Sutaria starrer [Exclusive]

Check out Malaika's comment on Arjun's post here: Also Read - Will Arjun Kapoor and Malaika Arora star in a project together in the future? Here's what the Bhoot Police actor has to say [Exclusive] 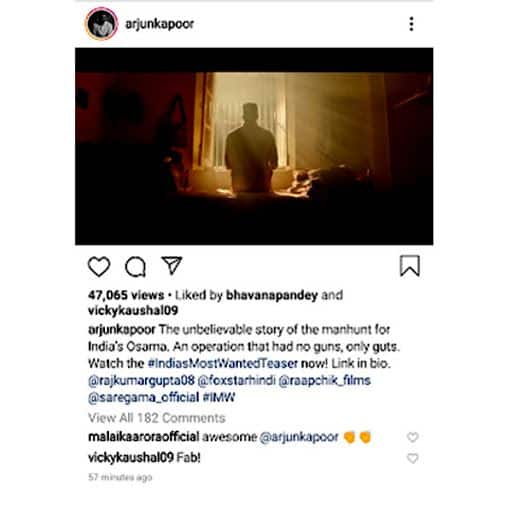 The unbelievable story of the manhunt for India’s Osama. An operation that had no guns, only guts. Watch the #IndiasMostWantedTeaser now! Link in bio. @rajkumargupta08 @foxstarhindi @raapchik_films @saregama_official #IMW

Yesterday, when Arjun Kapoor shared the first poster of his film, Malaika was quick to drop a fire emoji in the comments section and we, for a fact, know that she meant Arjun is looking hot as fire in the poster. Must say, Malaika is a doting girlfriend, who supports her partner in every step of his life. Meanwhile, the rumours of their impending wedding are spreading like wildfire. In an interview, Malla had admitted that she has found love again. "I guess everyone wants to move on and find love and companionship with people they can relate to. And if you do, I think you are just lucky. If you can do that, I think you are lucky to find that second chance at being happy," she had said.

The unbelievable story of the manhunt for India’s Osama. An operation that had no guns, only guts. Watch the #IndiasMostWantedTeaser now! Link in bio. @rajkumargupta08 @foxstarhindi @raapchik_films @saregama_official #IMW

However, when Malaika was quizzed regarding her marriage rumours, the Chaiyya Chaiyya girl replied, "There is no truth to these silly speculations." Guess the two are not ready to speak publicly about their relationship and we respect their decision. Still, we shall wait for the day when Malla and Arjun will make it official.

On the work front, Arjun's film India's Most Wanted releases on May 24. Besides that, the actor has Sandeep Aur Pinky Faraar and Panipat lined up.