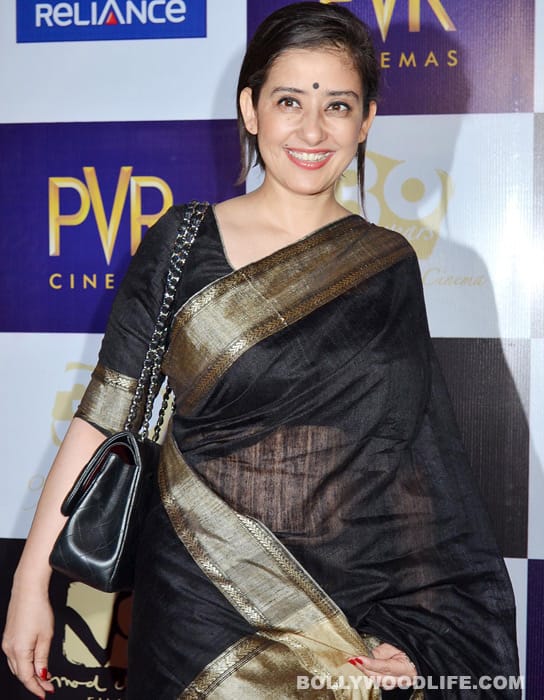 The actor is back with three releases in 2013

Manisha Koirala surprised everyone when she attended a special screening of Parinda last night (March 29) at a retrospective of Vidhu Vinod Chopra. The actor was there as a mark of respect for the director who cast her in 1942: A Love Story. What made everyone take notice was the way Manisha was radiating happiness. Just two months ago, the actor had been spotted at a party in a horrid dress, looking haggard and pale. However, at this screening, she looked like her older self - fit and fine. She mingled, smiled and spoke to the media about her Bollywood career. Manisha revealed that she has signed three films and she'll start work on them this year. That means we will get to see her on the big screen once again. She has also approved two other scripts but is yet to discuss details with the directors. Next year, she grinned, would be her comeback. She stopped short of actually mentioning names, as she didn't want to disclose details till the filmmakers involved made official announcements. Also Read - When birthday girl Manisha Koirala was called a ‘terrible actress’ by Vidhu Vinod Chopra but she proved him wrong by bagging his film

Manisha had made her debut in 1991 in Saudagar and went on to give critically acclaimed performances in 1942: A Love Story, Dil Se, Akele Hum Akele Tum, Bombay, Lajja and Gupt among others. Her last hit was Company in 2002. Though she did several films after that, they were either shelved or had flopped. Manisha too moved away from B-town to concentrate on her marriage to Nepali businessman Samrat Dahal. Rumour was that there was trouble in paradise, but it seems now she has got past that. Most recently, she gained critical acclaim for her performance in I AM. When quizzed about Heroine being based on her life, she quipped that she hopes Madhur Bhandarkar knows her well enough to actually make a movie on her life. We are just glad the pretty lady is looking fab once again and we really hope the roles she has signed up for are more along the lines of Bombay and not Ek Chhotisi Love Story. Good luck, Manisha! Also Read - Anil Kapoor reveals that he initially rejected 1942: A Love Story – deets inside