Met Gala 2019: Lady Gaga to Katy Perry and Billy Porter, here are the stand-out looks from the pink carpet

On the first Monday of May, from Lady Gaga to Cardi B and Jared Leto to Billy Porter, a whole lot of stars sashayed down the pink carpet for the Met Gala 2019

Met Gala 2019 pink carpet was definitely not for the faint hearted, from Katy Perry turning up as a chandelier to Lady Gaga literally stripping down her gorgeous outfits, the biggest fashion party of the year lived up to its reputation. Paparazzi had a field day as they went on a clicking spree, capturing the stars in all their glory. It was a tough task for us to pin who awed us most, but to laud fashion and experimentation that the stars put in, we have picked up the most striking and outrageous looks from the pink carpet, rolled out at the Metropolitan Museum of Art in New York. The theme for the gala night was Camp: Notes on Fashion and here's how the stars decoded it: Also Read - Oscars 2020: Heavy rainwater being collected in a bucket at the ceremony will remind you of every Indian village 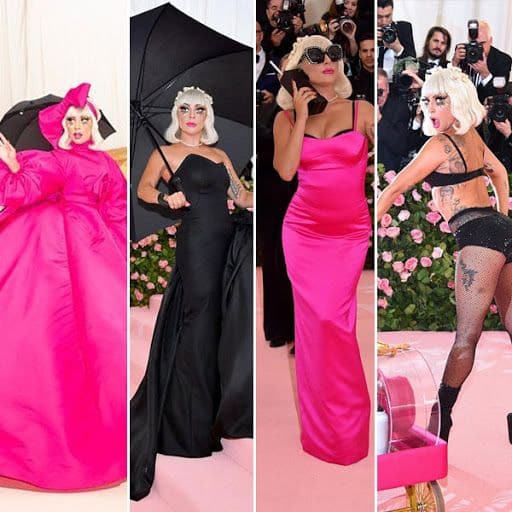 Lady Gaga owned the night! She knows how to make an entrance and her Met Gala 2019 pink carpet moment was a dramatic performance. Keeping the paparazzi glued, Lady Gaga entered in a billowing sea of fuchsia gown and a matching over-sized bow. Several men in black aka assistants helped her shed the gown and reveal a black strapless gown. Mind you, she had props for every look too! For the black dress Lady Gaga posed with a black umbrella. Revealing her third outfit for the night, Lady Gaga let fall her black dress to unveil a pink gown. Oversized Linda Farrow sunglasses and a retro block cell phone, accessorised her third avatar for the event. And the drama ended with Lady Gaga stripping down to her scanties. Adorned in glittering stockings and undergarments, the musician laid down on the steps, enthralling onlookers in her style. All her looks were designed by Brandon Maxwell. Also Read - Billy Porter wore a gown to Oscars 2019 and Indians are convinced Ranveer Singh inspired him – read tweets

From firework to chandelier! @katyperry lights up the #MetGala red carpet. #MetCamp #KatyPerry

Katy Perry was literally lit for the Met Gala pink carpet. Her glittering dress light-up with candles, set in a sparkly chandelier which she adorned for the event. The illuminated Moschino dress was designed by Jeremy Scott. Katy completed her look with a blonde wig and sparkly jewel-encrusted shoes.

While we are in awe of Lady Gaga's dramatic performance, Jared Leto walked the red carpet with his own severed head. The actor was dressed in a red Gucci high-neck gown with a jewel-encrusted body chain and his plus one for the event seemed like his own head. Last year, Gucci made its models walk the ramp with a replica of their heads and Jared Leto was an extension of their fashion statement.

Ezra Miller made heads turn and spin at the Met Gala with the mind-bending third eye make up. He made an entrance in a white embedded-cloak and held a mask to his face. However, dropping the drama, Ezra revealed his dizzy third eye and a custom Burberry suit designed by Riccardo Tisci, with an exaggerated cape detail and a crystal-studded cage corset.

Thank you to all who have taken the past six weeks to make this happen. Thank you to my Creative Director & Stylist @sammyratelle of @rrrcreative for your ability to dream big and for being by my side as we explore this new world. I am living my wildest high fashion dreams. @theblondsny @phillipeblond & @davidblond. There is no one like you. Thank you. For being kind. And fabulous. And glamorous. And snatched!!! I truly felt like a kween today. I will never forget it. @lasonyagunter, you beat this face for the gawds today gurl. Thank you for being my woman. @patmcgrathreal - I cant express enough gratitude for sponsoring our make up today. Mr. @giuseppezanotti - the fact that you created these shoes for me just for this night, is a dream come true. @nicolasputvinski thank you for allowing me to travel in style and designing the killer lewks for my escorts and palanquin. And to my sexy men, thank you for holding papa up. Creative Direction and Styling for all by @sammyratelle for @rrrcreative Agency ⠀ Styling Assistant: @ashleymarienyc⠀ Make-Up by: @lasonyagunter⠀ Custom Look: @theblondsny⠀ Custom Shoes: @giuseppezanotti⠀ Jewelry by: @oscarheyman @andreolifinejewelry @johnhardyjewlery @mordekaiofficial ⠀ Make-up provided by @patmcgrathreal Egyptian Litter & Carrier Designs by @nicolasputvinski⠀ Carrier Make-Up by @facebygoran @ashleyvictoriamua⠀ Mr. Porter's Broadway Carriers: @julius_anthony @taurenje @kellenstancil @thejoshdrake @lap_nyc @do

The men at Met Gala made the most striking appearances and Billy Porter made a massive contribution to that. He made an entrance sitting on a velvet chaise longue, carried by six bare-chested men in Egyptian-inspired ensembles. Posing on the pink carpet, Billy was dressed in a black and gold jumpsuit inspired by Cleopatra. He completed the look with golden boots, headgear and wings.

Celine Dion arrived on the pink carpet in a stunning metallic fringe accents Oscar de la Renta gown. She accessoried the look with a sparkly-spiky feathered crown and statement earrings. According to People, the ensemble took over 3,000 hours to create by 52 master embroiderers and weighed in at over 22 pounds.

Michael Urie made a bold gender statement in his half-tuzedo and half-gown look for the Met Gala 2019. He also put on a two-face look with his makeup, with one side featuring a beard and the other side going full glamorous with a single earning.

Serena Williams made a stunning entry on the pink carpet in statement yellow sneakers! The tennis pro wore an Atelier Versace gown with pink feather and leafy embellishment adding character to her cascading train. Serena complimented her style with a glamorous diamond watch, emerald rings and drop earrings.

Janelle Monae added a whole lot of detail to her camp-inspired look for Met Gala 2019. She was decked in a custom Christian Siriano dress, which featured a balloon-hip and added a bit of special effects to her style with a motorised winking eye.