Shahid Kapoor and Mira Rajput took the plunge on July 6, 2015. It was an arranged marriage but they fell in love eventually. Their wedding was one of the most hyped affairs at that time.

Shahid Kapoor and Mira Rajput make for one handsome couples of tinsel town. The two lovebirds dish out some major #couplegoals and quite often their virtual PDA makes us go aww. His wife often slips out a few secrets about Shahid, either in an interview with hubby or by commenting on his social media posts. And that is what happened recently, Shahid's wife Mira left a funny comment on a photograph of her actor-husband which is pretty awesome. Apparently, Shahid along with brother Ishaan and friends is currently enjoying a road trip in Switzerland. Also Read - Trending OTT News Today: Venkatesh's Narappa release date out, Fahadh Faasil's C U Soon 2 confirmed, Soorarai Pottru's Bollywood remake and more

Shahid Kapoor took to his Instagram handle and shared a couple of pictures from his trip and the only way to describe the pictures is HOT HOT HOT. In one of the pictures which the star shared, we can see him leaning on his bike. The picturesque countryside backdrop would make you want to go on a vacation and that too a road trip very soon. Sharing the image he wrote, "#Traveldiaries". Have a look at the picture he shared here: Also Read - Shahid Kapoor’s OTT debut with Raj & DK is an over the top dhamaka; will see him in a never seen before avatar

The actor received compliments from his fans and friends from the industry about how he is looking cool and charming as ever. But Mira's comment was what grabbed our attention. Mira was quick to respond to Shahid's picture with lots of fire and heart-eyes emojis. Have a look at Mira's comment here: Also Read - Kiara Advani, Pooja Hegde, Kriti Sanon: These 6 Bollywood beauties are a HIT with south Indian filmmakers 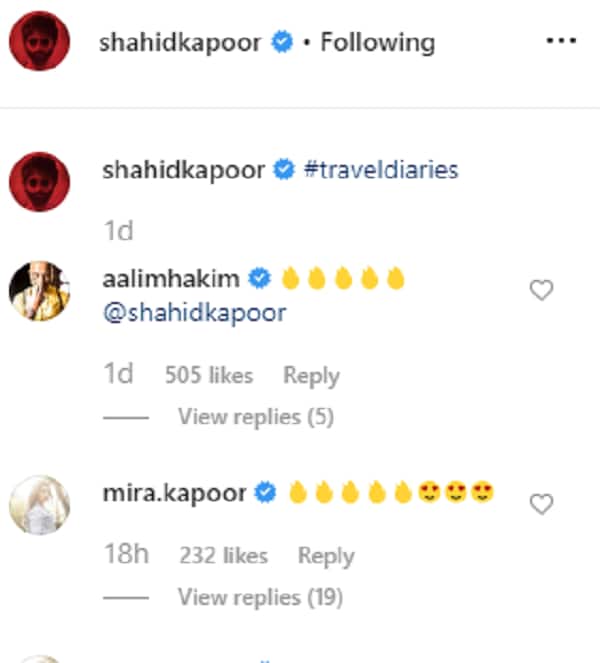 Mira then tagged her sister and praised Shahid's hairstyle as well. She wrote, "I know right. He's even aced hat-hair." Have a look at Mira's comment here: 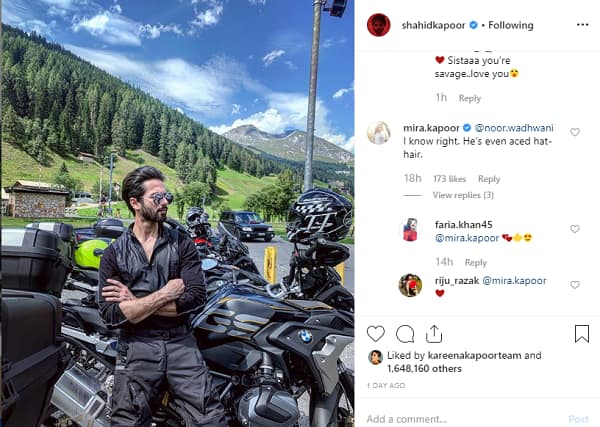 Aren't these two adorbs? We think so too. Here are other pictures which Shahid shared on his social media page:

Shahid Kapoor and Mira Rajput took the plunge on July 6, 2015. It was an arranged marriage but they fell in love eventually. Their wedding was one of the most hyped affairs at that time. Over the years they have grown to be one of the most talked-about couples of Bollywood. Shahid and Mira have two children, a daughter Misha and a son Zain. For more scoops and updates, stay tuned to BollywoodLife.