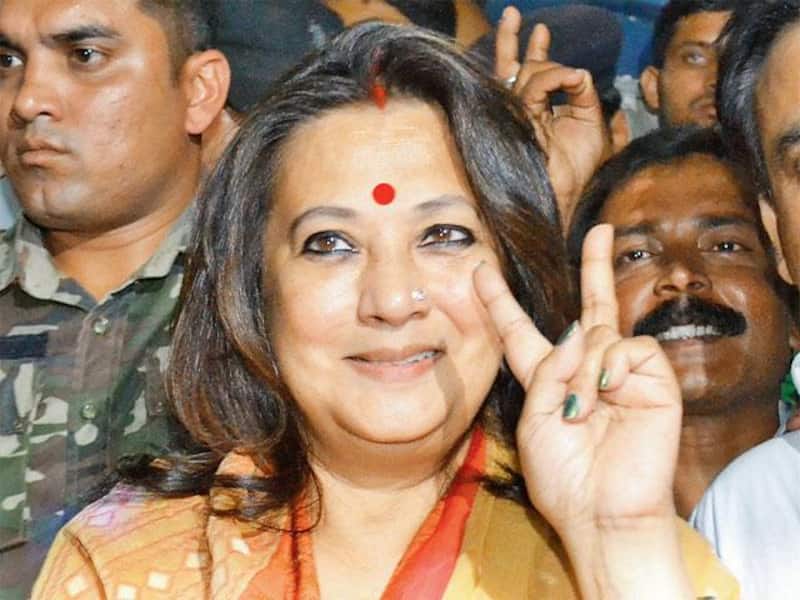 It is great to have so many women in the Lok Sabha this time, says the glamorous actor-turned-politician Moon Moon Sen, a first time parliamentarian from the Trinamool Congress. Clad in an off-white sari with a golden border, the stylish actor who is the daughter of legendary Bengali film star Suchitra Sen, says she has already begun her work as a parliamentarian back in her constituency Bankura. Also Read - Hansika Motwani to Anjali Arora: Actresses who hit headlines for alleged MMS Leak scandal

Sen pulled off a major upset in her poll debut this Lok Sabha election by defeating nine-time MP Basudeb Acharia of the CPI-M in West Bengal's Bankura Lok Sabha constituency. She triumphed by 97,511 votes over Acharia, who had been winning from the seat without a break since 1980. "I have already started work with the goals which my party promised like roads, water and other amenities," the heroine with her trademark red bindi, kohl-lined eyes and traditional jewellery, told as she walked on the corridors of Parliament House, which she was very impressed to see and set foot upon for the first time in her life. Wednesday was the first day of the 16th Lok Sabha, but it was adjourned in less than 15 minutes after condoling the death of union minister Gopinath Munde, who died in a road accident Tuesday. Also Read - Bharat Jodo Yatra: Pooja Bhatt to Rashami Desai — Celebs who joined Rahul Gandhi in his mission

Asked how she felt on so many women being elected to the parliament this time, she exclaimed: "Isn't it great". The Lok Sabha this time has the highest tally of women MPs ever at 61. Sen also mentioned that it was a point to be noted that so many chief ministers of states were also women at present, including her own West Bengal, referring to the Trinamool Congress chief Mamata Banerjee. Questioned as to whether the women's reservation bill could be passed now with so many women members, she said: "hopefully". Also Read - From Kangana Ranaut to Sunny Leone: 7 Bollywood actresses who have the hottest navel piercings [View Pics]

However, she was quick to qualify that it was also the men who were responsible. "We can't run the men down," she added, rolling her expressive eyes. "It is their job too. Everybody should do it." During a tour of Parliament House for the Trinamool Congress' new MPs, conducted by senior party leader Mukul Roy Tuesday, Sen had said: "My mother (who passed away early this year) would have really felt proud."

She was also very impressed to see the impressive domes and corridors of India's supreme legislative body. Known for her work in Bengali, Hindi, Tamil, Telugu, Malayalam, Marathi and Kannada films, Sen has also starred in Bollywood films. She received Andhra Pradesh state Nandi Award for best supporting Actor (Female) in 1987, for her role in the film Sirivennela. She has acted in 60 films and 40 Television series. Her two daughters - Riya and Raima - are also heroines.