Mouni Roy posts a stunning pic with Hrithik Roshan from an ad shoot in Amsterdam; Mrunal Thakur bowled over by their chemistry

Mouni Roy posts picture from Amsterdam with Hrithik Roshan and posts ad video; Mrunal Thakur bowled over by their chemistry

Mouni Roy has realised one more dream. The Naagin actress has just shot an ad for a foreign liquor brand in Amsterdam with none other than Hrithik Roshan. She shared the pic on her Instagram handle. We can see him in a dark blue suit while she is in a black dress. The chemistry between the two is absolutely terrific in that short video. Mouni Roy captioned it, "From an amazing shoot day with this wonderful human." The actress has been quite busy after her marriage with Suraj Nambiar. She is seen as the judge of Dance India Dance Lil Masters. Mouni Roy hosted the show with Remo D'Souza and Sonali Bendre. Also Read - When Nia Sharma revealed her friends would judge her red carpet looks; 'Why do you walk naked...'

We can see how gorgeous the two are looking with the backdrop of Amsterdam's skyline. The sunset sky has added to the effect. Her besties Aashka Goradia and Smriti Khanna left hearts and emojis. Aashka wrote Hot Hotter Hottest. This time, we are seeing some fresh pairings for commercials and it is a welcome change. Take a look at the video... Also Read - Amar Upadhyay reacts on Hina Khan and Helly Shah's comment of discrimination against TV stars; says, 'Bollywood has always treated...' [Exclusive]

The reactions from her friends Anuradha Khurana, Rahul Utekar, Karishma Sharma and Mrunal Thakur is so cute. In fact, Mrunal Thakur was all of us when she said she wants to see the two in a movie together. Mrunal Thakur like Mouni Roy has made a transition from TV shows to Bollywood. She was Hrithik Roshan's co-star in the hit film, Super 30. Also Read - Flashback Friday: Move over Swaran Ghar and Thapki Pyar Ki 2, Kyunki Saas Bhi Kabhi Bahu Thi's bizarre scene will leave you shell-shocked 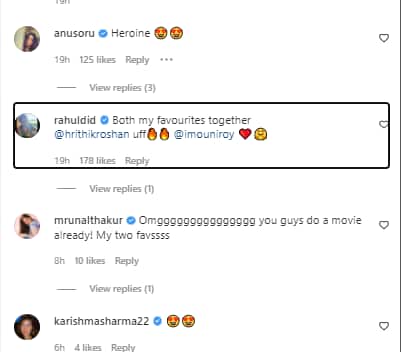 Mouni Roy is gearing up for the release of Brahmastra. She plays the role of an antagonist in the movie. Mouni Roy is also Amitabh Bachchan's daughter in the movie. The film has Ranbir Kapoor and Alia Bhatt in lead roles. Mouni Roy who is known as the original Naagin from Ekta Kapoor's hit show is a household name. She has over 22 million followers on Instagram.