Movies to watch this week: Daawat-e-Ishq and Khoobsurat! 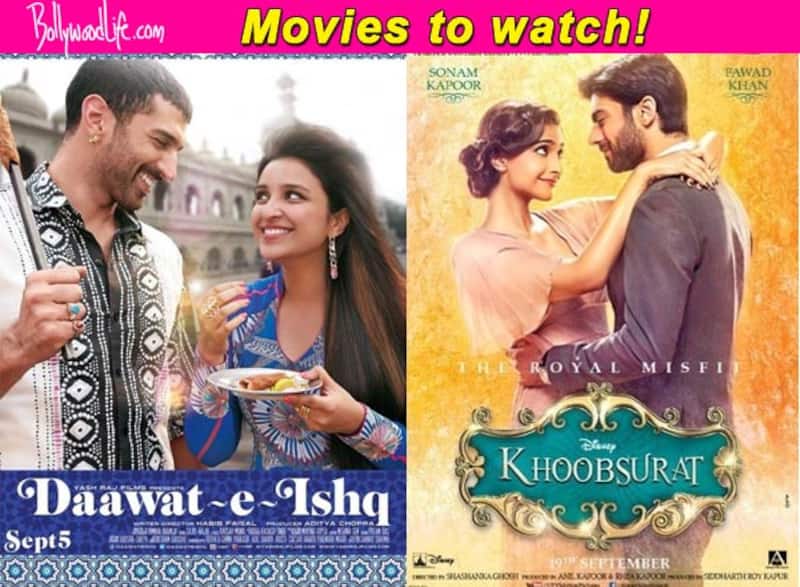 Audiences will be treated to Parineeti Chopra and Aditya Roy Kapur's food feisty rom com and along will also get to see Sonam Kapoor trying to woo Fawad Khan in a royally misfit way. Which one should you watch and which one should you pass? Read on to find out...

Synopsis: Meet Hyderabad ki tez Gulrez (Parineeti Chopra) and Lucknow ka aashiq Tariq (Aditya Roy Kapur) in a love story from Yash Raj Films' kitchen, where Love gets Spicy, Love gets Sweet, Love gets Bitter. A shoe-sales girl, disillusioned with love because of her encounters with dowry-seeking men and a cook, who can charm anybody with the aroma and flavours of his biryani and kebabs, come face to face in the clash of diametrically opposite but equally spicy cultures of Hyderabad and Lucknow. In her quest to find her Mr. Universe, she comes up against Big Boss Hyderi Kebab and in the process of arriving at a "tuning-setting", Gullu and Taru rewrite traditional recipes of love, crush old-fashioned world-views and make their own masaledaar albeli pichchar... a deliciously romantic Daawat-e-Ishq.

Why should you watch: The film is the second collaboration of Parineeti and director Habib Faisal after Ishaqzaade, which did really well at the box office. So similar results can be expected from this as well. Also, Aditya Roy Kapur is coming back to silver screen after two super successful films last year, Aashiqui 2 and Yeh Jawaani Hai Deewani. There will be a huge expectation from him to deliver another 100 crore blockbuster. TV heart throb Karan Wahi will be seen making his B-Town debut with this film and we think all this makes it a must watch.

Synopsis: The film is a remake of 1980's Khubsoorat starring Ashok Kumar, Dina Pathak, Rakesh Roshan and Rekha with modern touch. The story will be that of a modern day girl who will be entering the house of a royal family and she will be a complete misfit there. But the soon-to-be King, Fawad Khan will somehow start getting attracted towards this uncanny and edgy Sonam Kapoor. Will the blossoming love be given proper importance in the family of royals? Or will it be nipped right in the bud? We will have to wait and watch.

Why should you watch: Sonam Kapoor has not had a successful run this year with Bewakoofiyaan but before that her last two performances Raanjhanaa and Bhaag Milkha Bhaag proved her mettle. Also this will mark the debut of Pakistani heart throb Fawad Khan in Bollywood. The movie will also see Ratna Pathak Shah portray the same character which her mom Dina Pathak played in the original 1980 film. The remake will have a similar story line but the modern day touches seem to have been done fabulously. However, it is only the trailer that we have seen yet, so we will have to wait and watch the film as to know whether all these changes have worked in favour of the film or not. As far as we are considered, the movie is surely a NO MISS.

So audiences, go ahead and take your pick this week.